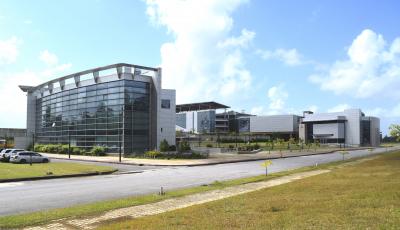 What was once a proposal to make the University of Trinidad & Tobago (UTT) Tamana Campus available for use as one of its cost saving initiatives is almost a reality, as the facility is near ready to accommodate staff and students.

UTT’s Vice Chairman, Professor Clement Imbert, during a tour of the facility said construction and out-fitting of the east wing is completed and ready to accommodate the administrative staff, while the west wing, which is also complete will accommodate classrooms and offices for lecturers and academic staff.

UTT invited a team of senior officials from the Ministry of Education, led by the Honourable Anthony Garcia, Minister of Education to tour the facilities on Tuesday 11th February, 2020 for a first-hand look at the works done. Minister Garcia also addressed senior executives of UTT at brief meeting held during the tour.

Commenting on the progress made thus far, Minister Garcia said, “This is my second visit to the facility and I am very impressed with the progress made to complete the buildings. I am also very satisfied with the work done thus far by the UTT Administration in collaboration with its Board of Governors to address the financial challenges the institution has been facing and the cost saving measures being implemented at UTT”.

During the tour of the facility, Minister Garcia and the MoE’s team visited the east wing, where  available space would be converted to classrooms to house over one thousand students who are currently attending classes at the UTT Valsayn and O’ Meara Campuses.