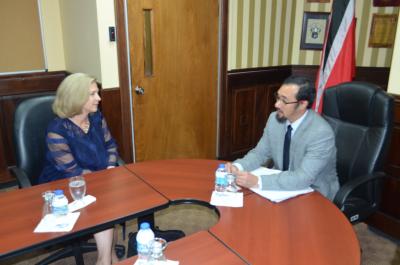 Minister of National Security and Acting Minister of Foreign and Caricom Affairs, the Honourable Stuart R. Young M.P. received a courtesy call from Mrs. Katherine Dueholm, Director of the Office of Caribbean Affairs from the U.S. State Department’s Bureau of Western Hemisphere Affairs and other officials from the US Embassy in Port of Spain on Thursdat 5 December 2019.

The meeting took place at the Ministry of National Security, 31-33 Abercromby Street, Port of Spain. The meeting focused on current and future collaboration between the Governments of Trinidad and Tobago and the United States of America, with an emphasis on capacity building and mutual assistance in several areas of national security.

Mrs. Dueholm thanked Minister Young for the opportunity to meet and reiterated the commitment of the United States of America, to the further development of a mutually beneficial partnership with Trinidad and Tobago.

Minister Young expressed his appreciation to Mrs. Dueholm for her Government’s continued support to the Ministry of National Security and expressed the Ministry’s anticipation for the continued collaborative efforts between the two countries.