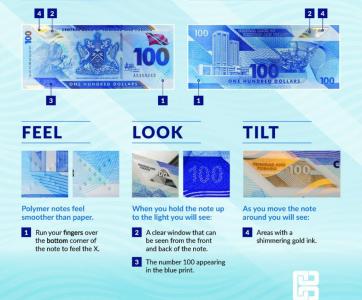 The Government of the Republic of Trinidad and Tobago (GoRTT) wishes to acknowledge the public’s concerns about the transition to the new TT 100 dollar note.

Various arms of the state inclusive of the Ministries of Finance and National Security, the Central Bank of Trinidad and Tobago - the body responsible for the administration and implementation of the new TT 100 dollar note, and the Trinidad and Tobago Police Service (TTPS) are working to provide timely information to citizens to ensure the process is as seamless as possible.

The Central Bank is committed to providing updates and public education about the new TT 100 dollar note while the TTPS has given the assurance that officers are on foot and mobile patrols around the banks.

The new note which is printed on polymer is more durable and can last two and half (2 ½) times longer than the paper equivalent. It is also more accessible to the visually impaired and the blind and is more secure than the traditional paper bank notes.

The Central Bank has advised citizens that they should examine the new note for the following four (4) public security features:

- Run your fingers at the bottom corner of the note to feel the x or a cross. There are a series of dots embossed on the reverse of the note which allows the visually impaired and the blind to recognize the denomination they are holding.

- The number 100 which is in the blue print but is not visible when the note is flat.

- Areas with a shimmering gold ink. The gold shimmering ink is located over the clear window.

- If you look at the note under magnification, some areas that appear as plain print are in fact very small letters and numbers

The new note is part of a national security measure which will assist in the fight against corruption, money laundering, tax evasion and counterfeiting.

The Central Bank of Trinidad and Tobago is responsible for monetary policy and the roll-out of the demonetisation plan. Their efforts have been supported by the Bankers Association of Trinidad and Tobago (BATT). BATT has indicated that all banks are working to ensure that ATMs are able to accept the new polymer TT 100 dollar note within the shortest possible time frame.