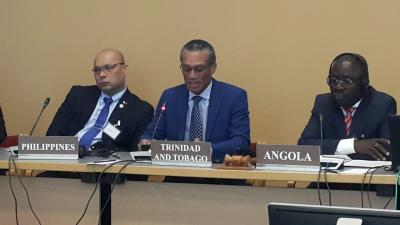 A Trinidad and Tobago delegation led by Senator  the Honourable Dennis Moses, Minister of Foreign and CARICOM Affairs, participated on the invitation of the Technical Secretariat of the Organisation for the Prohibition of Chemical Weapons (OPCW) to participate in the Global Stakeholders Forum on the Adoption of National Implementation Legislation on the Chemical Weapons Convention, which took place in The Hague, Kingdom of the Netherlands, from 03 to 05 December, 2019. The delegation included representatives from the Ministry of the Attorney General and Legal Affairs and the Ministry of National Security.

The OPCW is an international organisation that aims to implement the provisions of the Convention on the Prohibition of the Development, Production, Stockpiling and Use of Chemical Weapons and on Their Destruction (Chemical Weapons Convention or CWC) to eliminate an entire category of weapons of mass destruction (WMDs) by prohibiting the development, production, acquisition, stockpiling, retention, transfer, transhipment or use of chemical weapons or their constituent chemical elements by States Parties.

The Forum provides an opportunity for countries to determine how National Authorities can build and sustain strong partnerships with other national stakeholders in achieving a comprehensive Framework that incorporates the Chemical Weapons Convention into domestic legislation.

Among the countries selected to participate in and represented at this Forum weree Angola, Philippines, Myanmar, Georgia, Nigeria, Chile, Kenya, Mongolia, Nepal, Paraguay and Sierra Leone.

Trinidad and Tobago acceded to the CWC on 24 June 1997, which entered into force on 24 July 1997. As of 18 November 2019, there were 193 States Parties to the Convention, while one State (Israel) has signed without ratification. By virtue of becoming a State Party to this Convention, Trinidad and Tobago aligns itself with the global community in the fight against terrorism, in all its forms, especially mass terror caused through the use of chemical weapons.