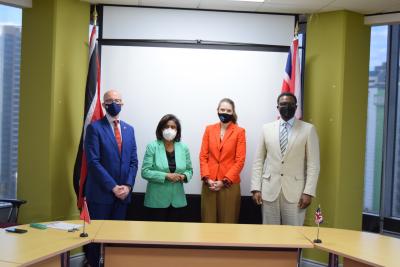 30 November, 2021: Senator the Honourable Paula Gopee-Scoon, Minister of Trade and Industry, met with a delegation from the United Kingdom (UK) jointly headed by Mr Darren Henry, UK Prime Minister’s Trade Envoy to the Caribbean and Member of Parliament, and Mr. Jonathan Knott, Her Majesty’s Trade Commissioner to Latin America and the Caribbean, on Thursday 25th November, 2021. Also in attendance was Her Excellency Ms. Harriet Cross, British High Commissioner to Trinidad and Tobago, representatives from the High Commission, and officials from the Ministry of Trade and Industry (MTI).

In welcoming the delegation, Minister Gopee-Scoon acknowledged the longstanding trade and economic relationship shared between the UK and Trinidad and Tobago. This is evident by the establishment of the most recent CARIFORUM-UK Economic Partnership Agreement (EPA) which, amongst other benefits, permits Trinidad and Tobago’s exporters’ valuable and preferential duty-free market access opportunities into the UK with the exception of products such as arms and ammunitions. Both parties discussed their shared visions for improving trade by advancing the CARIFORUM-UK EPA. The Minister expressed anticipation that the market access opportunities afforded under the EPA would be realised through greater exports to the UK market and a more favourable trade balance.

Trinidad and Tobago has been a net importer from the UK over the period 2015-2021, and our country’s main export has been Methanol and energy related products, while some non-energy products such as Aromatic bitters, iron and steel, alcoholic beverages among others have been making progress. However, the top imports from the UK included lubricating greases and oils, brake fluids, kerosene type jet fuel and urea, and non-energy products including motor vehicles, medicaments, whiskey, machinery parts, books, chocolate, clothing, cheese and tubes and pipes.

Discussions focused on avenues for growing trade for Trinidad and Tobago’s niche and non-energy products through trade missions, webinars and leveraging the diaspora. The UK delegation indicated that the EPA was a new chapter in the trade relations with the Region and that the goal was to double the volume of trade between the parties to the Agreement. In order to achieve this, the UK is pursuing improved trade infrastructure with the Region, which includes the updated trade agreement and greater trade promotion and facilitation activities.

Additionally, opportunities for investments and improving trade in services in the areas of tourism, the creative industries, and professional services were also discussed. The Minister indicated that His Excellency Vishnu Dhanpaul, the recently appointed High Commissioner for Trinidad and Tobago to the United Kingdom would welcome similar discussions on trade and investment opportunities with the team.

Discussions were also held as it relates to illicit trade, with both parties expressing concern for the health and economic challenges of this activity on both citizens and businesses. They agreed to increase collaboration and support Trinidad and Tobago in the fight toward the reduction and elimination of illicit trade. The delegation’s visit underscored the commitment to strengthen the trading relationship, the importance of the EPA and working together to ensure the growth, sustainability and economic development of both countries. The Minister as Chair of CARIFORUM on trade related matters until 30 June 2022, gave the assurance to continue to advance trade relations with the UK and the adoption and implementation of the EPA.