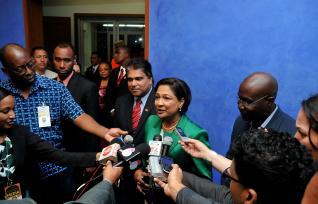 Prime Minister Kamla Persad-Bissessar said she was honoured that this country had been chosen by H.E. Xi Jinping, President of the People's Republic of China, as his first stop in this region of the Caribbean.

She made this comment following the arrival of Jinping at the South Terminal of the Piarco Airport, Piarco. The PM said she anticipated several "fruitful discussions" during Jinping's visit here over the next three days. He was accompanied by his wife First Lady Peng Liyuan and several Chinese Diplomats.

Persad-Bissessar also noted that several heads of CARICOM are expected in the country by Sunday to meet and converse with Jinping. When asked if the inclement weather had put any damper on Jinping's arrival, she stated that the rains should be considered "blessings".

"Trinidad is a great place to be, it is blessed," she stated smiling.

Persad-Bissessar added that this country was at the forefront of diplomatic relationships with world leaders, as she recalled the very recent visit of US Vice President Joseph R Biden Jr. and his wife Second Lady Dr. Jill Biden.

In paying homage to the "father of the nation" the late D.r Eric Williams, she noted that it was he who had forged the way for international ties and relationships with other heads of state and diplomats.

It was also noted that several agreements should be signed by the end of all discussions, as well as more information would be given the media and public during a press conference with Jinping, carded for tomorrow (June 1st) at the Diplomatic Center.

As for Jinping's wife, the PM described her as a "beautiful and warm" lady and acknowledged that she was a celebrity and singer in her own right in their country.

On the topic of a corrupt-free Government, which the Chinese head has been actively lobbying for, Persad-Bissessar stated that this country was of like mind.

She said Government too, was working hard to achieve this same goal.

She concluded the brief interview by stating, that the country should feel proud by the "back-to-back" visit of two prominent world leaders.