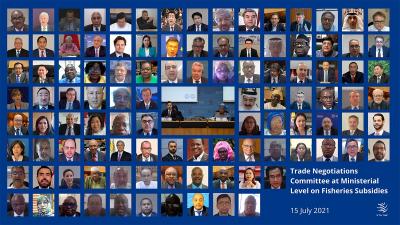 16 July, 2021: : Senator the Honourable Paula Gopee-Scoon, Minister of Trade and Industry led a delegation to participate in the World Trade Organization (WTO) Trade Negotiations Committee (TNC) Ministerial Meeting (Virtual) on 15 July, 2021. The delegation comprised Senator the Honourable Clarence Rambharat, Minister of Agriculture, Land and Fisheries, technical Officers from both Ministries, and representatives from Trinidad and Tobago’s Permanent Mission to the United Nations in Geneva.

The meeting focused on advancing the negotiation of an Agreement which seeks to limit harmful fisheries subsidies. WTO negotiations to reduce fishing subsidies commenced in 2001 and after 20 years, the aim of Member countries is to finalize an Agreement in 2021. In 2015 the negotiations were given a major push when the United Nations adopted the Sustainable Development Goal (SDG) target 14:6 which aimed at removal of certain forms of fisheries subsidies that contribute to overcapacity and overfishing, and illegal, unreported and unregulated fishing.

The fisheries sector is essential to many countries, and Trinidad and Tobago is no exception. Fishing that depletes fishing stocks, or is illegal, unreported and unregulated, negatively impacts ecological sustainability, food security, livelihoods, incomes and jobs. The global problem of depleting fish stocks is exacerbated when countries give subsidies that encourage fishing which negatively impacts fishing stocks. The main contributors to the problem are countries that subsidize large scale industrial fishing vessels which engage in distant water fishing.

Minister Rambharat addressed the Meeting on behalf of the delegation and emphasized Trinidad and Tobago’s commitment to negotiating an agreement that would limit and effectively discipline harmful fisheries subsidies. With Trinidad and Tobago’s fish catch at a minuscule 0.02% of global fish catches, Minister Rambharat highlighted that larger fishing countries which contribute to the problem should be a greater part of the solution. He underscored the importance of fisheries resources to the livelihood and wellbeing of Trinidad and Tobago, particularly the coastal and rural communities, such as the community in which he grew up.

Minister Rambharat also emphasized that Developing and Least Developed Country (LDC) Members must be afforded flexibility to address their sustainability and development needs. In the negotiations these flexibilities are collectively referred to as Special and Differential Treatment (S&DT), and he expressed that S&DT should remain an essential component of the Agreement. He also stressed the need for policy space to pursue the country’s economic development.

Director General of the WTO, Dr. Ngozi Okonjo-Iweala, noted that there is still work to be done, but was heartened by the support expressed by Ministers toward concluding a meaningful Agreement in 2021 to address this global problem.