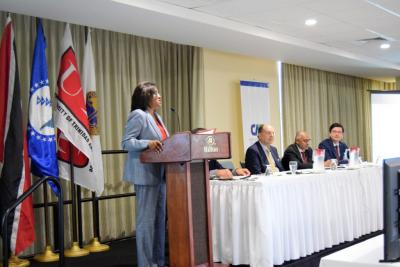 Minister of Trade and Industry, Senator the Honourable Paula Gopee-Scoon reiterated the importance of efficient and modern port operations at the 4thLatin American and Caribbean Meeting of Port Logistics Communities on August 8 at the Trinidad Hilton. The gathering which included representatives of the member countries of SELA – the Latin American and Caribbean Economic System, responsible for trade facilitation and transport, port administration, development and management were encouraged by Senator Gopee-Scoon to adopt best practices and apply them in national operations to improve the global trading environment and the lives of citizens.
The Minister shared initiatives being undertaken in Trinidad and Tobago by the Ministry of Trade and Industry (MTI) to embrace technology and spur on economic growth and development. Beyond policy development she stated that “Trinidad and Tobago was the 9th country to ratify the World Trade Organization’s (WTO) Trade Facilitation Agreement (TFA)….TFA implementation will among other things, expedite the movement, release and clearance of goods at the border.” The country is also embracing technology with the upgrade of the country’s Single Electronic Window (TTBizLink - an online platform managed by the MTI). This upgrade will ensure improved trade facilitation focussed on enhanced port connectivity while also eliminating gaps, minimising existing inefficiencies and improving the technological integration and communication between ports, stakeholders and trade and business agencies.
Focussed Minister of Works and Transport Senator the Honourable Rohan Sinanan who spoke at the event highlighted the importance of ports and shared some technology based projects being undertaken at the port of Port of Spain and Plipdeco. These he added would impact service delivery and ensure Trinidad and Tobago remains an active player on the world stage of international trade. According to the Minister “The endgame is to ensure that our ports can continue to deliver service that satisfies the needs of our customers exceeding their expectations and remaining globally competitive.”
Mr Javier Paulinich, Permanent Secretary of SELA touted the importance of interconnectivity of ports and logistics systems. The conference, he indicated, would assist in establishing an agenda for a regional port system and facilitate technical cooperation. The meeting’s overall objective is to develop a regional agenda for trade facilitation and transport, with emphasis on the role of ports as articulators of competitiveness of logistics corridors for economic integration. Discussions generally focus on ICT solutions and services while providing a regional overview.
Trinidad and Tobago COVID-19 (Novel Coronavirus) Update # 375
Trinidad and Tobago COVID-19 (Novel Coronavirus) Update # 374
Unveiling of the Emancipation Monument - Emancipation Day 2020
Trinidad and Tobago COVID-19 (Novel Coronavirus) Update # 368
Trinidad and Tobago COVID-19 (Novel Coronavirus) Update # 369