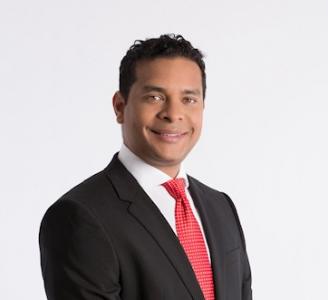 Eighty-one years after her father’s death, 93-year-old Scottish national, Rosemary Smith nee Allan was unable to withhold the tears during a 30-minute visit to his graveside at Mucurapo Cemetery last Sunday.

Her father, James Allan, who worked at a brewery in Trinidad, died in 1938 and Mrs Smith – who was a 12-year-old-student at a Presbyterian school then - returned to live in Scotland shortly afterwards.

And Tourism Minister Honourable Randall Mitchell was very pleased about the opportunity created for Sunday’s visit by the cruise passenger and her family. He said tourism was not only about leisure experiences but “can also be a beautiful, emotional experience where someone could return to this country to see the gravesite of her deceased father.” Minister Mitchell was also happy that all stakeholders, including the Ministry of Tourism and others, came together to ensure Mrs Smith and her family were able to achieve their main objective for the visit.

Mrs Smith came to Trinidad last Sunday with her daughter, Lesley Potter, and son-in-law, Steve Potter, on the Caribbean Princess cruise line for what she believed would be her last opportunity to visit her father’s graveside.

Shortly before 10 am that day, Mrs Smith’s face lit up with joy at the cemetery when she was greeted by its Manager, Peter Seeberan. He was the same person she met 14 years ago and contracted to upkeep the grave. She was pleased with what he did over the past several years and was able to identify the grave from pictures he had sent her in 2004.

She was shocked and pleasantly surprised when Tourism official presented her with a bouquet of flowers, in Scottish colours, which she later placed on her father’s grave.

Mrs Smith and her family were later met by Port-of-Spain Mayor Joel Martinez, TTL’s CEO Camille Campbell and others at the Queen’s Park Savannah before their pre-booked tour to Maracas Bay.

She was very grateful to all for the tremendous assistance given during the visit.

Mrs Smith, who was 12 year-old student at a Presbyterian school, when her father died, left Trinidad shortly after his death for Scotland with her family in 1938.