Tewarie- Town and Country Planning Division to be improved 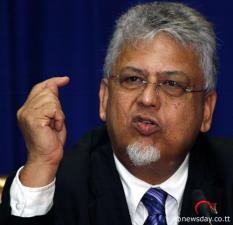 Tewarie- Town and Country Planning Division to be improved

The Ministry of Planning and Sustainable Development has taken steps to improve the efficiency of the application process of the Town and Country Planning Division of the Ministry.

Speaking earlier today at the weekly post-Cabinet media briefing at the Diplomatic Centre in St. Ann’s, line Minister, Dr. Bhoendradatt Tewarie made the announcement noting that no application at the division should take more than 60 days to be approved.

A number of pilot projects will also be undertaken throughout the various regional corporations, starting with the Port-of-Spain City Corporation.
Tewarie said from 2006 to 2012 the Division received 52,600 applications for permission to develop land.

“We have been trying to reduce the back log and improve the business of planning permission for citizens, whether they are developers or citizens building homes. We are also bringing things up to date and streamlining the process,” the Minister said.

Tewarie said that sine mid 2011 there has been an intensified effort to reduce the back log. As such, as of December 2012, there was a backlog of 3,610 applications.

“We had to clear this over the last several the months. This has been processed up to today. We have cleared the backlog for 2012 and processing 2013 applications. Having done this and now we are seeking to stream line customer service.”
Therefore, Tewarie noted that from February 21, 2013 the Division has initiated an every day technical service at all regional divisions were members can come in on a daily basis to get advice.

In addition, the Minister announced that a new internal review system has been implemented to oversee all unsuccessful in order to minimise the process of appeal which all unsuccessful applicant can do.