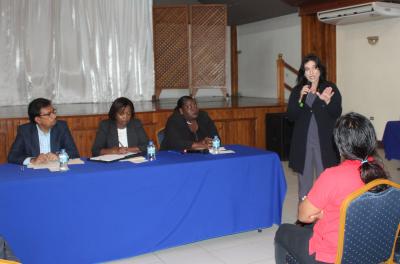 The Ministry of Rural Development and Local Government hosted a stakeholder meeting yesterday in the City of San Fernando to discuss the proposal for a dog pound that will provide services for the seven (7) southern Municipal Corporations. Bringing together the respective Mayors, Chairmen, public health officials and NGO interest groups, the Ministry opened a dialogue for the way forward that will address the problem of stray dogs, while adhering to international animal welfare standards.

Representatives from the Trinidad and Tobago Society for the Prevention of Cruelty to Animals, the Animal Welfare Network and Animals Alive voiced concerns specifically about the capacity and condition of the existing San Fernando Dog Pound. The Ministry’s Technical Team offered a proposal to upgrade this facility in the short term, while plans for a new regional facility at a different location are developed for the long term.

Minister Haji Kazim Hosein stated, “This is an issue that requires consultation with all groups, and the best way forward is to have a committee formed from the members here today, so we can ensure that the animals are treated humanely while we address the issue of strays in the community. I like the ideas that have been voiced, especially for spay and neuter drives so we can promote responsible pet ownership and control the growth of the stray population.”

The San Fernando City Corporation dog pound is currently empty and all dogs that were recently housed at the facility have been adopted.