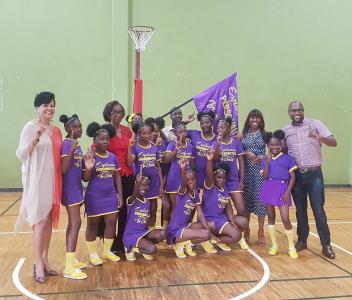 On Monday July 30, 2018, Minister of Sport and Youth Affairs, the Honourable Shamfa Cudjoe along with other Ministry and SporTT officials who included Permanent Secretary, Nicolette Duke; Director of Physical Education and Sport, Patrice Charles and Executive Manager, Sports Development, SporTT, Anthony Creed; met with the President of the Trinidad and Tobago Netball Association (TTNA), Dr. Patricia Butcher and other TTNA officials at the Ministry’s Head Office in St. Clair.

Top on the agenda was a request for state support toward the TTNA’s participation in the upcoming Americas World Cup Qualifier in Barbados from August 26 to September 2, 2018. Discussions also centred on the current as well as future plans the Association had for Netball in Trinidad and Tobago. The Ministry of Sport and Youth Affairs committed to assisting the Association with the costs associated with accommodation, airfare and umpire fees to the tune of $117,000.00.

It should be noted that as at July 23, 2018, the TTNA had only been 65% compliant with SporTT guidelines for funding given that their audited financials for the years 2016 and 2017 were outstanding. At the meeting on July 30, 2018, the 2016 audited financials were presented to SporTT. TTNA’s 2017 financials still remain outstanding, however at the meeting Dr. Butcher committed to have this submitted in the ensuing weeks.

Guided by the Ministry’s Policy Values of integrity, transparency and accountability, the Honourable Minister urged the TTNA and by extension all other sporting bodies to ensure that their financial documents are up to date.  Minister Cudjoe also called upon all sporting organizations to be compliant with the Ministry’s and SPORTT’s guidelines for accessing Government funding.

The Ministry of Sport and Youth Affairs continues to play an important role in providing assistance to NGBs and athletes, as well as contributing to the holistic development of sport and sporting achievements in Trinidad and Tobago.  Likewise, the Ministry is committed to enhancing meaningful relationships with all stakeholders, towards the advancement of sport in Trinidad and Tobago in keeping with the vision of the National Sport Policy 2017-2027.