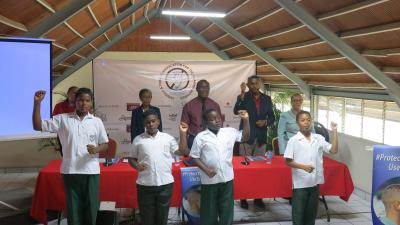 On Wednesday February 13th, the Ministry of Social Development and Family Services, in collaboration with the T&T Association for the Hearing Impaired, the Ministry of Health, the Ministry of Education and other key stakeholders, launched a National Awareness Campaign entitled, Protect Your Hearing. The event took place at 10:00 a.m. at the DRETCHI Compound, Wrightson Road, Port of Spain.

This initiative, which is now in its second year, has the objective of raising further consciousness about hearing loss and the identification of symptoms that are responsible for same. It also aims to educate citizens on how to preserve their auditory health. These objectives, are in keeping with the MSDFS’ commitment to building a nurturing, resilient and inclusive society for all citizens. Other key stakeholders include the T&T Red Cross Society and Quota International.

Deputy Permanent Secretary, Mr. Dennis Williams gave the feature address on behalf of the Minister of Social Development and Family Services. During the remarks, he highlighted the campaign’s significance in the context of Trinidad and Tobago’s carnival season. He noted that the timing was most appropriate, because it provided direct access to at-risk groups, which are most prone to hearing loss. Some of these include youth, performers, masqueraders, fete patrons, disc jockeys and event spectators.

Leading audiologist, Dr Deborah Pinder, who represented the Ministry of Health, shared that recent global statistics estimated that 1.1 billion persons between the ages of 12 and 35, are at risk for hearing loss, because of their exposure to loud noises during recreational activities. In Trinidad and Tobago, this has become increasingly more evident, as a consequence of our annual carnival celebrations. Executive Officer at TTAHI, Ms. Qushiba La Fleur, also confirmed this by revealing that DRETCHI’s internal records demonstrate an increase in demand for tinnitus therapy and other hearing-related services, in the weeks following local festivities.

Also speaking at the launch was Mrs. Felicia Rodriguez-Cupid of the Student Support Services Division at the Ministry of Education, who focused on the importance of the Protect Your Hearing Campaign to the local education system. She divulged that through on-going collaborations with the Ministry of Health at various primary and secondary schools, it has been observed that hearing loss amongst students is on the increase and has negatively impacted the general performance and behaviour of students at both levels. This of course, has the potential to undermine our country’s productivity and creativity in years to follow.

Desperadoes Steel Orchestra, was also announced as a partner in the campaign to keep members of the local steelpan fraternity informed and involved. Their participation represents a significant milestone in appealing to the extensive body of musicians, tuners and arrangers, to get tested regularly. This is because of their reliance on hearing for employability and competitiveness.

The Protect Your Hearing Campaign is being undertaken simultaneously in Aruba, Curacao and Suriname. It will also commemorate the International Day of Hearing, which is annually observed on March 3rd. The campaign will be promoted through mainstream media inclusive of radio, television and billboards, as well as, via presentations at various schools. Users of social media can also follow developments and become involved by using the handle #protectyourhearing

The Ministry of Social Development and Family Services is happy to be a part of this important initiative and to collaborate with all stakeholders to ensure its implementation.