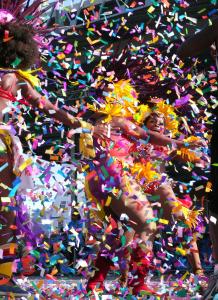 Over the past five years there has been a consistent pattern of decline in the rate of serious crimes reported over the two day Carnival period, which is directly attributable to the safety and security measures implemented by the Trinidad and Tobago Police Service (TTPS), in collaboration with stakeholders.

The increased level of safety experienced by masqueraders and spectators during the two-day festival, is a result of a combination of policing strategies including, but not limited to, significantly ramped up visible police presence; joint police-army patrols; aerial and border patrols, road and street exercises; stop and searches; targeting of priority offenders, security sweeps, setting-up of strategic check points and the conduct of spot Driving Under the Influence exercises.

The TTPS will continue  to collaborate with all stakeholders to ensure public safety and security at Carnival-related events in every community in 2018, by suppressing crime through a pro-active, collaborative, intelligence-led, technology-driven and well-defined strategic approach.