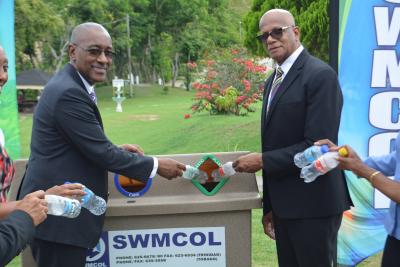 The City of San Fernando is going green. The nation’s second city is the latest region to sign on to SWMCOL’s Curbside Recycling Initiative. The launch of the programme in the southern city took place on the scenic San Fernando Hill on Monday.

Delivering the feature address at the launch, Public Utilities Minister, Senator Robert Le Hunte, under whose portfolio SWMCOL falls, said that as a southerner himself he felt a great sense of pride to declare San Fernando as the first City to sign on to the initiative.

He noted it was all part of Government’s 2030 Strategic Vision which places the environment and its protection at the heart of sustainable development. He said the plan speaks to putting in place a comprehensive waste management system for the country and the Curbside Recycling Programme is one such initiative that will give life to that plan.

Coupled with that, he says, the initiative will make recycling accessible, an objective which SWMCOL is working towards with the launch of its many recycling initiatives and the placing of bins at strategic locations in various parts of the country.

This waste management thrust, Minister Le Hunte said, will be complimented by introducing waste rules, and the Beverage Container Bill into the legislative framework which governs waste disposal and management. In addition, he says, the new waste management system must also include incentives for the development of a recycling industry, which can become a viable earner of foreign exchange.

SWMCOL’s Deputy Chairman, Lizbeth Ann- Hamilton said that in 2014 SWMCOL launched its “Get into Green”, as part of the local contribution to a global effort to reduce the earth’s carbon footprint. She said, it is the intention of the company to promote this programme through all the 14 municipal corporations in Trinidad.

Mayor of San Fernando Alderman Junia Regrello said the City was proud to sign on to the Curbside Recycling Programme, thereby becoming the first city in the country to do so.

Mayor Regrello and Minister Le Hunte also distributed prizes to winners of the schools Trash Art Competition, where several students were invited to participate in a competition utilizing waste to create various pieces of art.