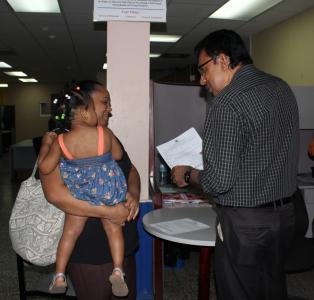 Minister Kazim Hosein commended the efficient and courteous service being delievered to members of the public by the staff at the Mayaro/Rio Claro Regional Corporation. During his visit on Monday, Minister Hosein saw first-hand the customer care demonstrated by the hospitable clerks assigned by the Corporation to assist walk-in citizens with filling out and submitting forms such as birth certificate applications, passport applications, NIS forms and various social welfare and grant applications.

Minister Hosein noted that under the Municipal Corporations Act Section 232 (m), one of the Miscellaneous Functions of the Corporation is “the collection and distribution of forms issued by Departments of Government.” He said, “Mayaro/Rio Claro is leading by example when it comes to customer care and assisting not only their elderly burgesses but the youth who are seeking assistance with employment applications. I am very pleased to see citizens coming to the corporation for help and leaving with a smile on their faces. Something as simple as assisting someone with the copying of an I.D. card or even helping to complete an NIS form is being provided, without burgesses having to leave their region. And this is what local government is all about; bringing these essential services closer to the people, especially those in rural communities.”

According to Chairman Glen Ram, making social welfare forms available at the Municipal Corporation saves many citizens time and money, “A round trip to the social welfare office would cost $24 in a taxi, and for the elderly or disabled if they have to carry someone to assist them, it would be double that. We are saving them that hassle by collecting the forms here and helping them to fill them out on the spot. Thus far over 350 persons have visited the Corporation, in this month alone, for assistance with such services and we are happy to be able to help.”

While at the Municipal Corporation, Minister Hosein assisted citizens who came for passport and NIS forms and also witnessed elderly persons being aided with the completion of birth certificate applications. He further encouraged all other Municipal Corporations to take up this miscellaneous function to make it easier for citizens to access services of all government agencies saying, “In keeping with local government reform, we must be ready and committed to the mandate of good governance and service delievery by putting people first”.