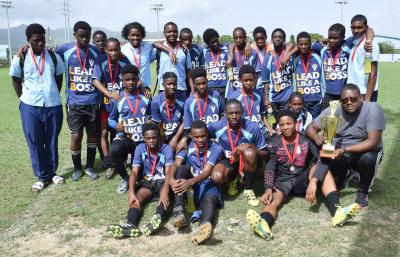 After vanquishing a tough Hokett Baptist team in a bruising semi-final, the Rose Hill RC squad was determined to go all the way and bring home the title in the final. They took command of the midfield and were more precise and direct with fluent attacks at the opposition’s goal.

It was only a matter of time for the Rose Hill strikers to breach the St. Barbs defence which came courtesy of Jashawn Grazette in the first half, with the second item coming off their prolific striker Isiah Bobb who sealed the final victory with a close range “missile” late in the second half.

In the final of the Secondary Schools category of the Laventille/Morvant Schools Improvement Project, Malick Secondary School beat South East Port-of-Spain Secondary School 1-0. The winning goal was scored by the fleet footed Zion Carpette who tapped home from close range.

Members from both of the winning team and the second placed team in the finals also received medals for their on-field success.

The Laventille/Morvant Schools Improvement Project Football Tournament is designed to develop a friendly rivalry among the players, supporters and other community members from the twenty five (25) schools that comprise the Laventille/Morvant Schools Improvement Project. The competition also develops among the players a sense of discipline, fair play and respect for their opponents.