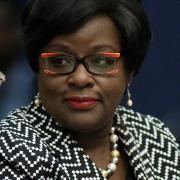 The Honourable Camille Robinson-Regis, Minister of Planning and Development has secured further financial support in the form of Grant Funding from the Inter-American Development Bank (IDB) towards emergency relief efforts for communities affected by recent flooding in October.  This follows the grant of US $200,000.00 from the Caribbean Development Bank (CDB) through the utilisation of the Emergency Response Grant under the CDB’s Disaster Management Strategy and Operational Guidelines.

Minister Robinson-Regis, who serves as a Governor of the IDB of which the Ministry of Planning and Development is the focal point in Trinidad and Tobago, accepted the Bank’s offer of US $200,000.00 (approx. TT $1.3 million) on behalf of the Government and people of Trinidad and Tobago.  The Technical Assistance for Disaster Emergencies grant is to support the Government’s continued efforts to address the immediate disaster relief needs which have arisen as a result of the flooding.  The Permanent Secretary of the Ministry of Planning and Development, Mrs. Joanne Deoraj, has engaged the Trinidad and Tobago Red Cross Society to be “the executing agency to ensure that these resources reach the affected communities and bring relief to our affected citizens as quickly as possible”.  Minister Robinson-Regis acknowledged the venerable and mutually beneficial relationship with the IDB of which this Grant is a testament and thanked Ms. Rocio Medina Bolivar, the IDB’s Country Representative, for this display of goodwill towards the people of Trinidad and Tobago.  Of the IDB’s willingness to support Trinidad and Tobago, Ms. Rocío Medina-Bolívar, Country Representative of the IDB Group in Trinidad and Tobago said, “On behalf of the Inter-American Development Bank (IDB) Group, in mobilizing emergency financial resources, I would like to reiterate that we stand in solidarity with all those tragically affected by the recently experienced adverse weather”.

On October 24th, 2018, Minister Robinson-Regis, who is also a Governor on the Board of Governors of the Caribbean Development Bank confirmed the offer of another US $200,000.00 from the CDB for assistance to flood victims to be implemented by the United Nations Development Programme in T&T.  The Development Bank of Latin America (CAF) also provided a grant of US $200,000.00 towards flood assistance.  The total provided by the three agencies amounts to approximately TT $4 million.

Minister Robinson-Regis re-emphasises this Government’s commitment to ensuring that all affected citizens continue to have access to relief and praises the efforts of all citizens, Non-Governmental Organisations and Government agencies who have come to the aid of those in need.