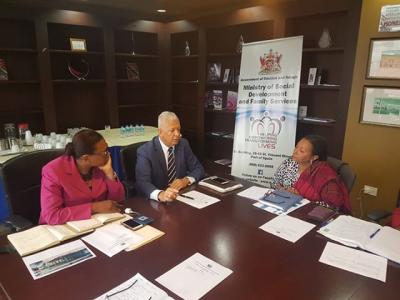 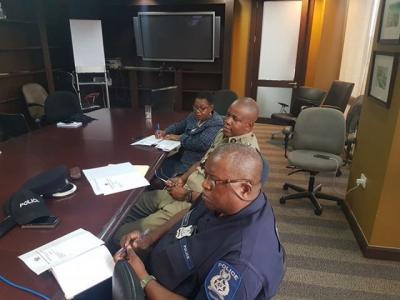 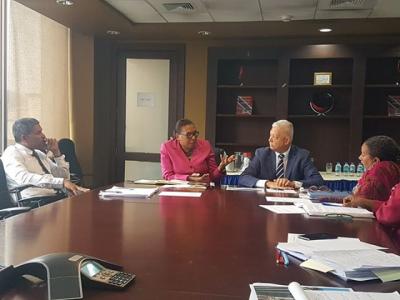 Riverside Plaza Car Park has been recently upgraded with the installation of gates to provide increased security for the street dwellers who utilize the facilities of the Centre for Socially Displaced Persons (CSDP). Port of Spain Mayor, Alderman Joel Martinez told officials from the Ministry of Social Development and Family Services last week, that the Corporation’s decision to install gates was designed to encourage persons providing meals on a daily basis to street dwellers, to make use of the secure space provided at the CSDP as a central point for distribution.  In so doing, the street dwellers would have the added benefit of not only receiving a hot meal, but also have access to washrooms and assessment services from the Ministry of Social Development and Family Services.

This was revealed at a meeting between the Mayor, Social Development Ministry officials and other key stakeholder agencies last week, which focused on the continuing efforts to relocate and rehabilitate the increasing population of street dwellers in the capital city. Such a move, it was noted, was also in alignment with Government’s National Development Strategy (Vision 2030), and adopted as part of the Corporation's "Move Along" approach for encouraging street dwellers to desist from occupying various spaces in the capital city, and to move instead to facilities such as the CSDP where services are available. The ‘move along’ strategy is expected to intensify in the coming weeks and to continue as an on-going strategy to keep the capital city free from street dwelling.

Mayor Martinez noted that there had been increased reports of illicit drug sales and other criminal activities occurring in and around the CSDP facility, especially at nights. To combat this, the Corporation also intended to enhance the lighting around the facility, and to continue its drive to relocate the street dwellers to other existing and safer facilities in the shortest possible timeframe. Representatives of the Trinidad and Tobago Police Service (TTPS) who were present at the meeting committed to increased mobile and foot patrols within the vicinity of the CSDP and environs.

Jacinta Bailey-Sobers, Permanent Secretary in the Ministry of Social Development and Family Services noted that while the issue of street dwelling was a social issue, it required a collaborative, consistent effort, with dedication and commitment by all agencies. She gave the Ministry’s commitment to work with all stakeholders who provide services to street dwellers, to enable successful implementation of the strategy. This position was endorsed by Mayor Martinez who reiterated his desire to make the city a safe and secure place that was inviting to both businesses and pedestrians.