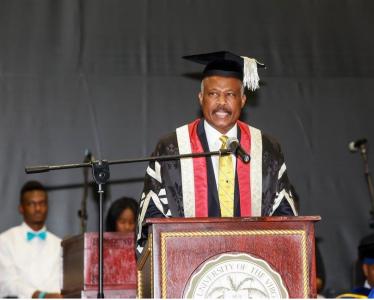 “I was a student in the 1970s, a decade that embraced Black Power, anti-apartheid, and all of those struggles. We had a sense of responsibility for those who were going to walk in our footsteps. You have done what our generation expected of you and, to my mind, you are looking just fine,” he told the gathering.

UVI President David Hall said Sir Hilary is “The epitome of academic excellence and an outstanding Caribbean scholar. We want the presence and words of Sir Hilary Beckles to inspire our graduates to reach for the stars of their own aspirations, and to contribute to the intellectual, educational and economic growth of the Caribbean as Sir Hilary has done through his work.”

Renowned Virgin Islanders Ruth Moolenaar of St. Thomas and Richard A. Schrader, Sr. of St. Croix also received honorary doctorates at the UVI’s 52nd annual commencement ceremonies for their cultural and intellectual contributions to the territory.

Nearly 300 degrees were conferred at those ceremonies, held on May 12 and 13, in St. Thomas and St. Croix.

For his complete biography, visit:  http://www.uwi.edu/VCBiography.asp

The Marketing and Communications Office

University of the West Indies