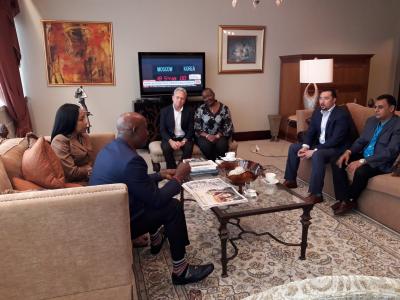 The Prime Minister of Trinidad and Tobago, Dr the Honourable Keith Rowley has accepted an invitation from His Excellency Li Keqiang, Premier of the State Council of the People’s Republic of China for an Official Visit to China starting in Beijing, China on May 14, 2018.

The Honourable Prime Minister will lead a delegation which includes Senator the Honorable Dennis Moses, the Minister of Foreign and CARICOM Affairs, the Honourable Stuart R. Young, M.P., Minister in the Office of the Prime Minister and Minister in the Ministry of the Attorney General and Legal Affairs, Commodore Hayden Pritchard, Chief of Defence Staff, and the Chairmen of Caribbean Airlines Limited and Lake Asphalt of Trinidad and Tobago (1978) Limited. Mrs. Sharon Rowley will also accompany Dr Rowley on the official visit.

The delegation departs from Trinidad and Tobago today, Saturday 12 May, 2018, arriving in Beijing, China on Monday 14 May, 2018 for the commencement of the official visit.

Trinidad and Tobago and China have been working on a number of initiatives in various areas including, finance, tourism, construction and the airline industries and towards mutual benefits associated with President Xi Jinping’s One Belt and One Road initiative. It is expected that Trinidad and Tobago will sign a number of MOUs with the People’s Republic of China on this visit and the leaders will reaffirm the importance of the relationship to each country.

The discussions in Australia will focus on national security issues, possible financing arrangements and the possibility of purchasing ferries for the sea bridge between Trinidad and Tobago.

The delegation is expected to visit Perth, Canberra, Melbourne and Sydney in Australia before returning to Trinidad.

The Hon. Colm Imbert will act as Prime Minister during the period that Dr Rowley is out of the country.