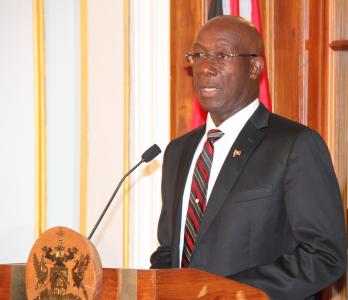 As Prime Minister I take note of the actions and statements of the Opposition Leader in accusing me and the Attorney General of engaging in a cover-up in the Darryl Smith matter. Mrs Persad-Bissessar who claims to be a Senior Counsel must know that the stymying of the publication and use of the Investigative Report is directly as a result of legal caution provided by authorities outside of the Office of the Prime Minister and the Office of the Attorney General.

In fact, it was the Prime Minister who initially passed the report to the Permanent Secretary, without restriction, for any Public Service action which may be deemed necessary. It is in furtherance of this process that independent legal caution advised against advancing the report. This being the undisputed fact it is therefore dangerously hypocritical and self-serving for the Opposition Leader to join the ill-informed in talking about conspiracies to cover-up facts.

In keeping with this ridiculous behaviour she has initiated written requests to various Government offices for criminal investigations of “suspicion” of a crime that “may” have occurred.

What is most irresponsible about all this is that if there is one office holder in the country who should know and behave better it is the Opposition Leader who has first-hand experience as a Prime Minister who, against proper advice, irresponsibly released a faulty report, in the Anil Roberts criminal Life Sport scandal and by so doing derailed the investigation and resulted in a successful court challenge by Mr Roberts. This action of Mrs Persad-Bissessar resulted in huge costs to taxpayers at the end of the court process.

It is against this background that I reject any notion of cover-up and I condemn the naked hypocrisy associated with this current accusation, however, I stand ready to fully cooperate with any investigating entity in the full knowledge that the public will benefit from the facts as separate from any speculation, conjecture or malice from any quarter.