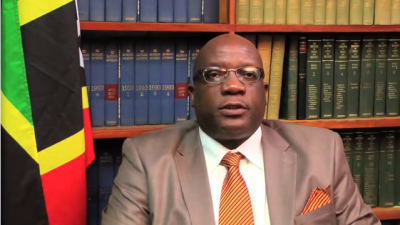 Caption: Newly elected Prime Minister of St. Kitts-Nevis, Dr. Timothy Harris. (Photo courtesy mycaribbeanscoop.com)
February 19, 2015: Prime Minister Kamla Persad-Bissessar has congratulated Dr. Timothy Harris on his appointment as Prime Minister of St. Kitts-Nevis, following General Elections on the island on Monday 16th February, 2015.
“On behalf of the Government and people of Trinidad and Tobago and on my own behalf I congratulate the Political Leader of Team Unity, the Honourable Dr. Timothy Harris, on his victory,” Prime Minister Kamla Persad-Bissessar said in a media release Wednesday.
Dr. Harris led a coalition of three parties to win seven of the eleven seats in the national legislature; the other four seats went to the St. Kitts-Nevis Labour Party (SKNLP) led by outgoing Prime Minister Dr. Denzil Douglas, who was seeking an unprecedented fifth term in office.
Mrs. Persad-Bissessar also commended Dr. Douglas for his graciousness in conceding and wishing the new Government well.
“I congratulate Dr. Douglas for his respect for the will of the people. His service to his country over two decades and commitment to democracy has allowed a smooth transition to a new government,” the Prime Minister said.
Mrs. Persad-Bissessar had expressed concern over the delay in releasing the results, noting that the region's reputation for democracy and for free and fair elections was under threat.
The Supervisor of Elections, Wingrove George, had suspended counting of votes on Monday night. He broke his silence on Tuesday and named Team Unity the winner of Monday’s general election.
“I look forward to working with Prime Minister Harris, as the members of the Caribbean Community seek to advance regional integration and cooperation,” Prime Minister Persad-Bissessar said.
-END-