President of the People's Republic of China H.E. Xi Jinping arrives amidst rainfall 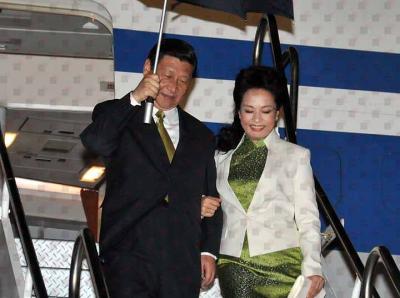 President of the People's Republic of China H.E. Xi Jinping arrives amidst rainfall

President of the Republic of China, Xi Jinping arrived in the country amidst heavy drizzle and the bombardment of the Chinese media.

Accomapnied by First Lady Peng Liyuan and a large contingent of Chinese diplomats, Jinping arrived at the South Terminal on board an Air China aircraft shortly after 7 :00 pm.

While a few of the ministers drew out their umbrellas, most of them braved the inclement weather as they awaited their turn to greet Jinping.

The national anthem of both countries were performed by the military band. Part of the evening's procession also included gun salutes and military performances.

Jinping then walked the entire tarmac greeting each parliamentary Minister, after which, accompanied by Persad-Bissessar, he approached the Trinidad and Tobago Defence Force Steel Orchestra, as they performed a medley of songs.

Umbrellas lifted overhead, the PM and Jinping remained at the front of the band, as members of the Chinese media took photos and video taped the auspicious event.

President Carmona waved to on-lookers, mostly the media, as he entered his vehicle to depart the airport. Jinping then left the airport, followed by at least nine chartered vehicles filled with Chinese nationals and diplomats.