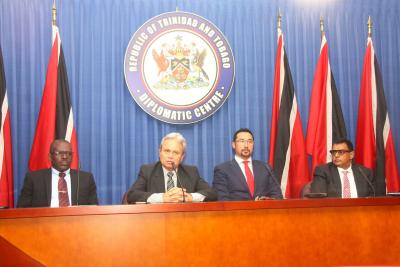 The Honourable Stuart Young, Minister in the Office of the Prime Minister and Minister in the Ministry of the Attorney General and Legal Affairs, hosted the Post Cabinet Press Briefing today (Thursday 6th April, 2017) at the Diplomatic Centre, St. Ann’s.

Addressing the conference was Senator the Honourable Rohan Sinanan, Minister of Works and Transport, who provided a brief report on the decision to charter a super-fast vessel used for inter-island transport. On the 30th March 2017, the ministry received a notice letter which expressed that the present vessel will be pulled from service on the 14th April 2017. A subsequent letter presented a later end-of-service date of 18th April.

As a result, teams consisting of ministry and port executives have mobilised in order to place tenders for new cargo vessels – one for purchase and one for a lease of 3 years. As such, no hiccups are expected to occur during the upcoming Easter weekend and beyond as several contingency plans have been put into place. For example, one option is the employment of the T&T Spirit which is a partial cargo vessel. Additionally, a barge to carry construction materials to Tobago is available. There are also two (2) military vessels as well as other service vessels operating in the energy sector which can be utilised as/if required to address this short fall in capacity. Cabinet has also approved the decision to purchase a vessel to avoid a reoccurrence of this potential conflict.

Minister Young also presented substantial feedback on the Prime Minister’s visit to Houston, USA where he participated in discussions with transnational energy companies, namely BP, Shell, Exxon and EOG Resources. Minister Young highlighted that these discussions were the resulting culmination of months of negotiations. Coming out of the meetings, Prime Minister Dr Rowley agreed with executives from BP and EOG Resources on certain prices of gas, supported by the advice and information of technocrats from the Ministry of Energy and Energy Industries.

According to Minister Young, BP underlined that these conversations have been underway prior to 2015 and included projects to keep Trinidad and Tobago stable going forward. One of those items includes the processing of recently concluded 3D seismic research which suggests positive discoveries at this early stage. BP also reaffirmed their intention to continue with significant investment having been particularly bolstered by this interaction with high level Government officials.

Minister Young also noted that discussions with Exxon served to further attract investment to Trinidad and Tobago as well as offer assistance to Guyana as it continues to nurture its burgeoning energy sector. He also indicated that the GORTT is hoping to sign an MOU with Guyana in the areas of energy and agriculture. Additionally, Minister Young noted that negotiations with EOG Resources had stalled and the recent meetings facilitated a resumption of those negotiations and directives for new activities to be assumed. The outcome of this exercise will address inadequate supplies of upstream gas for the local downstream industry, a number of expired accounts/contracts which resulted in claims being filed against NGC, insufficient work done being carried out in the field and substantial curtailment issues dating back to 2011.

This all marks a positive thrust for the continuation and building of the gas industry in Trinidad and Tobago.

Also available to address questions posed by members of the media were the Acting Prime Minister and Minister of Finance, the Honourable Colm Imbert, as well as the Minister of National Security, Retired Major General Edmund Dillon.