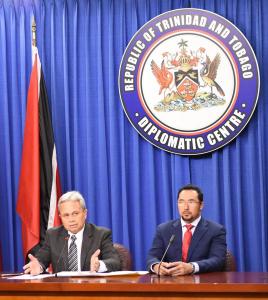 The Minister of Finance, Colm Imbert addressed the Post Cabinet Press Briefing today (Thursday 27th April 2017) at the Diplomatic Centre, St. Ann’s. Minister Imbert clarified details regarding the recent ratings by both Moody’s and Standard and Poor’s (S&P) and the implementation of the Property Tax Act.

The Minister of Finance said S&P rated Trinidad and Tobago as stable because the agency is of the view that our economy will recover based on fiscal consolidation work being done by the Government to bring the country’s accounts into balance.  Minister Imbert said S&P looked at our consolidation work and looked at what we are doing in the energy sector through arrangements with Venezuela and major oil and gas companies and they were satisfied that our prospects are good enough to upgrade our outlook from negative to stable. However, they downgraded our investment rating because we continue to experience a significant shortfall in revenue. He said we suffered a severe loss of $20B income since 2014. Our income was $57B a year and is now $37B. Some of the measures utilised because of the shortfall in revenue include a reduction in expenditure, subsidies & transfers, borrowings, Heritage and Stabilisation Fund withdrawals, a one-off sale of assets, IPOs and the recovery of money from CLICO.

Minister Imbert said, “We have a huge gap to make up of $20B. If a company’s income went down by 40% think of the impact.” The Minister of Finance said Moody’s is more conservative. It downgraded us to the lowest level in the investment grade table because it felt that we have not slashed enough expenditure. Its view differed from S&P. He said, “We have already slashed expenditure by $10B a year but they want us to slash even more. This is why they gave us a Baa3 rating.”

The Minister advised that the Government will consider allowing a third agency - Fitch Ratings - to conduct an assessment of Trinidad and Tobago in the future as there is a view that Moody’s downgrade was a bit unreasonable. The Minister also spoke about the implementation of the Property Tax Act. He said that he has instructed his officers to conduct an extensive communications campaign to address the public’s concerns and questions.

Minister Imbert said there are several steps involved in the implementation of the tax and that this was just the first phase where homeowners are being asked to submit details about their property so that an assessment can be made. The Minister acknowledged that the payment of additional taxes, while burdensome is necessary given the economic climate and that we all have to do our part to contribute. He said that the Act allows for deferrals for the impoverished and that he was examining whether this deferral could be changed to a complete waiver of the charge.