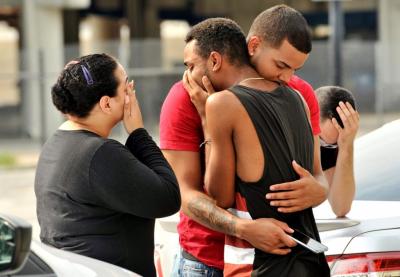 Caption: Friends and family members embrace outside the Orlando Police Headquarters during the investigation of a shooting at an Orlando nightclub where many lives were lost and other persons injured. (Photo courtesy pbs.org)

June 12, 2016: On behalf of the Government and People of the Republic of Trinidad and Tobago, I wish to convey heartfelt condolences to the President of the United States of America and the American People with respect to the unspeakable horrors of this morning's attack on an Orlando, Florida nightclub, the worst mass shooting in American history.

As the Government and people of the United States of America struggle to come to terms with this terrible tragedy, Trinidad and Tobago is also gripped by shock, sadness and outrage. No nation should ever have to face such tragedy and it is hoped that nothing of this nature will ever befall any nation again.

Prime Minister of the Republic of Trinidad and Tobago

The Public Information and Communications Unit