PM Persad- Bissessar's address on the state of the economy 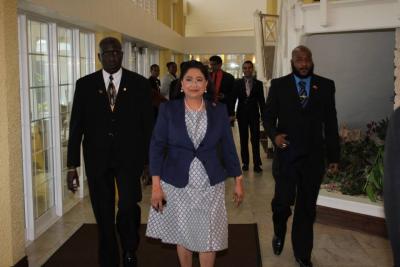 January 9, 2015: The following is a statement made my Prime Minister, the Honourable Kamla Persad-Bissessar on the evening of January 8, 2015 on matters of the state of the economy:

When we last spoke on the eve of the New Year, 2015, I made a commitment to have this conversation with you.

My commitment came about because of growing turbulence in the global energy sector, and the impact of lower oil prices on economies such as ours.

In the past four and a half years, we have managed to reverse economic decline, to bring stability, to restore confidence, and to return to a path of growth.

We have delivered opportunities for us to truly rise to our vast potential for real growth and advancement.

Today, the challenges being experienced due to this price turbulence in the global energy sector have created the conditions where our reforms, strength and resilience are being tested.

I give you the assurance that we shall navigate safely through these turbulent times.

The times therefore call for taking full responsibility, as we always have, and ensuring that we put people and country first.

In this way we can confront our challenges and together we will emerge stronger.

Over the past months, the price of crude oil moved from a high of US $107 per barrel in June 2014, to US$48.65 at the close of business yesterday, this represents a decline of 55 percent.

The 2015 Budget last September was based on projected revenue and expenditure using price assumptions of US$80.00 per barrel for oil and US$2.75 per mmBtu of gas.

The downward trend in oil prices globally has also impacted natural gas prices, and other petrochemicals are beginning to follow a similar path.

A number of forces in the international petroleum markets have set off this downward trend, namely:

These dynamics have combined to create the current situation where, in order to successfully navigate this period of price uncertainty, we must continue to act carefully and responsibly.

It is noteworthy to recall that when I was a member of the Government in the 90’s the oil price fell to as low as US$9 per barrel, yet the economy was kept strong, investor confidence remained high and stability was maintained.

I make this reference to reinforce the point that Trinidad and Tobago has been here before as was able to overcome the challenges.

The population can feel confident that once again the nation is fortunate to have a Government in place that has demonstrated responsible fiscal policies that have balanced investments in social programmes and people-centered development, whilst simultaneously turning the fragile economy we inherited in 2010 into the stable and strong one it is today.

Our economic reforms since 2010 have halted the decline, driven growth and repositioned us to a place where we have settled over 80 outstanding wage negotiations which we inherited and resolved that long outstanding 20 billion dollar CL/HCU matter and settled the huge debt to contractors amounting to over 2 billion dollars

Our management of the economy has fortified us enough to manage challenges in a manner that MINIMISES the impact on our citizens.

Today the economy is strong and in good shape. Continued careful management of our priorities, by placing people and country first, will keep us on a path to growth and progress.

When we took on the task of restoring stability, confidence and growth in 2010, we implemented a modern economic management system which was able to respond immediately to fluctuations and trends in the world economy.

Since October 2014, we have been evaluating a number of scenarios so as to be prepared for the possible challenges ahead.

The International Credit Rating Agency, Standard and Poor’s, Moody’s and the US Energy Information Administration, have projected that oil will rebound to between US$62.70 and US$70 in the near to medium term.

However, in this fiscal year, we have decided to use an even more conservative assumption of an average of US$45 per barrel of oil and US$2.25 per mmBtu for gas to adjust our national budget. What this means is that the shortfall will be $7.4 billion.

It is worth noting that our fiscal discipline has allowed us to deliver a budget deficit for 2014 of $2.6B. This figure is $3.7 billion or 55 percent less than the projected budgeted deficit of 6.3 billion dollars.

It is worth noting, that for the first quarter of the 2015 fiscal year, revenue was almost the same as was budgeted.

It is also very important to note that Trinidad and Tobago has been a gas-based economy for nearly two decades.

We produce over eight times more natural gas than crude oil on an energy equivalent basis.

A large portion of our energy production and exports is natural gas-based.

In fact, I am told that natural gas now contributes roughly 65 percent of total energy revenue.

These factors all play an important role in how we adjust our spending to maintain steady growth and stability.

Therefore, with the necessary adjustments we will not compromise and we will continue:

Today, in 2015, the macroeconomic indicators by which we measure our economic strength as a regional leader and global player are far better than the economy we inherited in 2010.

Our economic fundamentals are stronger:

The same prudence with which we managed the economy since 2010, to bring us to a position of resilience and stability, will be used in shifting our priorities and maintaining stability.

In moving forward there will be areas where we must moderate or redirect our spending in order to manage the present situation by keeping people and country first.

Reviews of our PSIP and recurrent expenditure are on-going with the aim of identifying savings of approximately $4.5 billion.

And you can be assured that these adjustments are aimed at preserving employment levels and job security.

Amongst those areas identified for re-directional spending and helping us to make up the shortfall from declining oil prices are:

THIS IS WHERE WE WILL HOLD TO OUR VISION

With adjustments in our spending priorities, the Government will ensure that our long term vision remains, by keeping the people and country first.

In the time since taking office, we have taken the concept of economic diversification beyond talk, and today, we are well within the process of building new sectors for the future economy.

Government will continue its investment in these and other new sectors that will support a gradual shift from heavy reliance on energy resources, to a broader based economy.

Adjusted priorities will also see us intensifying our collaboration for public/private partnerships.

Part of what will make a fully transformed and diversified economy will be greater business participation and it is our intention to increase the private sector footprint in our economy.

We will intensify the advance of Initial Public Offerings, a programme which has recorded great success with the First Citizens Bank Limited IPO and realised approximately $1B for the treasury of Trinidad and Tobago.

In delivering the budget statement last September, the Minister of Finance and the Economy indicated that the First Citizens IPO added more than 8,000 new investors, and that we were well on our way to achieving the public policy objective of the widest possible participation of all citizens in share ownership.

This will be the first ever listing of an energy stock on the local stock market, giving citizens a direct stake in our energy sector.

Your Government has also delivered tremendous progress in the areas of education and training.

Secondary education is now fully supported by a technology platform for all students in Forms 1 to 5 over 96,000 laptops and to students and teachers and have built over 80 schools over the last four years.

Tertiary education and skills-training participation has achieved a milestone of 65.2 percent enrolment and continues to grow from the approximately 42 percent in 2010.

And technical and vocational training now affords more opportunities for skills development, to more people, in more communities, and more disciplines than ever before.

Our vision remains, and we place a high priority on ensuring that our nation’s children and young people have every opportunity they need to build successful lives.

Infrastructure development, rural enhancement and construction are sectors that have been able to absorb a significant amount of semi-skilled labour.

A shift in our spending and investment priorities will see a maintained focus on transport and community infrastructure; rural development and construction.

The San Fernando to Mayaro Highway remains a key investment for us to fully create the Energy Corridor in the south where, for decades, a great deal of our energy wealth has been extracted and/or generated.

Indeed, even as we shift priorities in Government spending, we fully appreciate the need for strong and sustained social policies.

To maintain our goals of a better quality of life for all, the system of support grants, senior citizens pensions, the new minimum wage and care support for new mothers will be maintained.

Further measures to ensure that greater care is placed on managing us through this period of adjustment include:

Fellow citizens, in four and a half years, we have managed the economy and our resources with great care and dedication to ensure that our people and country are always first.

It is because we have the experience and capacity to weather these challenges, and because we have been here before, that we have positioned the economy on a strong footing, that make these commitments and assurances possible.

The adjustments in our priorities will continue to create greater harmony between social progress and economic advancement and we will successfully manage the challenges and emerge stronger, together.

I am of the firm view that this is no time for sudden changes in the direction of economic development policies.

Such an approach will negatively impact your comfort, investor confidence, business expansion and employment.

I am also of the firm view that using a period of challenges to promote fear and panic will be irresponsible, and will have the impact of creating problems where in fact no such problems exist.

We can withstand the lower oil prices and the right Government is in place at the best possible time.

Since 2010, whilst the world reeled from recession, this administration has curbed wanton spending and redirected resources in the best ways.

This has kept us strong and progressive.

I take the opportunity to pay tribute to the two Ministers of Finance and the Economy we have had guiding us over the past four and a half years.

As a result of their stewardship and the philosophy of my government to keep the development people-centred and responsible, Trinidad and Tobago stands steady and strong.

Currently at the helm of the nation’s Ministry of Finance is one our nation’s most highly regarded Ministers ever - Larry Howai.

His experience and expertise is second to none.

He accepted the offer to serve his country and is doing so admirably.

I wish to also thank the Permanent Secretaries and the Ministers in the Ministries of Finance and the Economy, Planning and Sustainable Development and Energy, as well as their respective technical staff for the contributions they have made over the past four years.

To the all public-spirited citizens who have sent in suggestions, I wish to thank you most sincerely for your valuable contributions.

I remain steadfast in always listening to the collective wisdom of the people, and will continue working to secure your lives and your wellbeing, and building a better future.

History will record this period as one of our finest hours, when we stood strong, made the right choices, exercised the right amount of restraint, held the right course and indeed saw the right results.

We have the capacity, we have the will and we have passion to secure our future and we will emerge stronger, together.

May God bless you all and may God continue to bless Trinidad and Tobago.