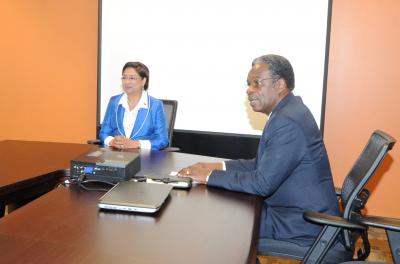 October 28, 2014: I endorse the comments made by the Honourable Orville London, Chief Secretary of the Tobago House of Assembly following the meeting with him and his delegation today, where seven issues were discussed, which provide an agenda framework with regard to the way forward.

Constitutional and Legislative Amendments towards Self-Government:

The Government reaffirmed its commitment to internal self-Government for Tobago.  In this regard the Chief Secretary put forward some suggestions which I agreed I would take to Cabinet for discussion as to the way forward.

I indicated to the Chief Secretary that there will be a special meeting of Cabinet in Tobago in the coming weeks, and we will engage the THA Executive.  Members of the Cabinet will at this time give the THA Chief Secretary an update on the way forward with respect to constitutional legislative reform with regard to internal self Government for Tobago.

We further committed to a meeting with the Chief Secretary in January 2015.

Incursion into areas devolved to the THA under the Fifth Schedule by the Central Government:

The other issue of discussion the Chief Secretary brought to my attention with respect to incursions by Central Government into areas devolved to the THA under the Fifth Schedule, I did undertake to look into those allegations.  I indicated very clearly that we would not condone illegality, as it pertains to the Tobago House of Assembly Act.

Minister Cadiz indicated that Expressions of Interest have been received for improvements to the airport.  Those tenders are to go out very shortly, and some time in January the tenders would be evaluated and awarded.

We look forward to some good news and work with regard to the Arthur NR Robinson airport.

THA’s access to and participation in additional modes of funding:

The Chief Secretary expressed his gratification over ongoing discussions with the Ministry of Finance on options that are currently on the table.  Those discussions will continue.

Implementation of strategies for the revitalization of the Tobago economy:

I was very heartened to hear the Chief Secretary say that there was some turnaround in the Tobago economy.  He indicated that more needs to be done and a review needed to be done, so we are looking to reconvene a meeting to discuss initiatives at length and determine the way forward.

Minister Bharath reminded that in August of this year the Government approved the loan guarantee programme for the tourism sector.   $1 billion will now become available for persons in the tourism industry which can be accessed for refurbishment of hotels.  $60 million was previously available.  Meetings will be held further on any challenges that persons may face with regard to their ability and capacity to access the funding that has been made available.

Challenges to the air and sea bridges:

With regard to the sea bridge and air bridge, some very interesting comments from the Chief Secretary were made, which we agreed to explore.   One suggestion that was made, is that in addition to the current available flights, that we consider a system of chartered flights with private entities or with Caribbean Airlines.  This may attract a higher rate than the subsidized rate, but guarantees persons a space on a flight at the times that are available, without the hassle that they may otherwise face.

It was brought to our attention that there is a system operating on our air bridge where a person can purchase a ticket, and the ticket is valid for a year, they can make several bookings on the same day or the next day and never utilize the ticket, and the flight will be seen as fully booked.

The current system means that these tickets can be reused, and as a result flights are not flying at their full complement.  A suggestion was made for consideration for the airline and perhaps the sea bridge as well to have a penalty fee for cancellation.

Those were the major matters discussed, and we look forward to meeting with the Chief Secretary in November, when we hold our special Cabinet meeting and retreat in Tobago.