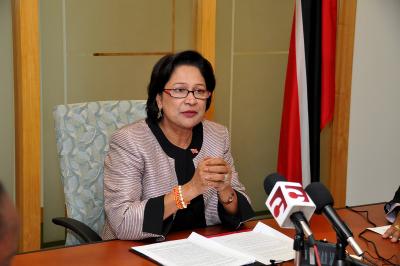 Caption: Prime Minister of the Republic of Trinidad and Tobago, the Honourable Kamla Persad-Bissessar. (File Photo)

February 18, 2015: The Government Trinidad and Tobago is concerned that a day after the closure of polling, authorities in St Kitts and Nevis have not yet declared the results of the election held on Monday, February 16th 2015.

In a statement on Tuesday February 17, Prime Minister Kamla Persad-Bissessar said, “We respect the independence of all lawful institutions in St. Kitts and Nevis, but at the same time we feel that the failure of the Supervisor of Elections to declare the results in a timely manner might create the impression that there is interference in the democratic process, which we in the Caribbean Community cherish.”

“I am also concerned that the region's reputation for democracy and for free and fair elections will be under threat as long as this issue in St Kitts and Nevis remains unresolved,” the Prime Minister said.

Prime Minister Persad-Bissessar noted that in any event, the Law does not generally allow the suspension of any part of the process until the respective returning officers return the writs.

The Prime Minister said, “It is the return of the writs that allows the public and the Governor General to know definitively what is the will of the people.

“As a region we have to be very careful of the messages that we send and that which is emanating from St. Kitts and Nevis is not the kind of message we want to send to our people and to the world.

“We await the results of the vote and would welcome whoever is the winner.”