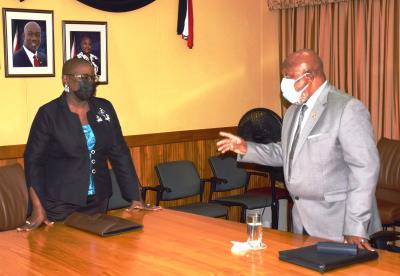 Planning and Development Minister Camille Robinson-Regis hosted a diplomatic visit with His Excellency Dennis Francis, newly appointed Head of Mission and Permanent Representative of Trinidad and Tobago to the United Nations, New York on Tuesday July 20, 2021.

Minister Robinson-Regis and the Head of Mission outlined Trinidad and Tobago’s national data collection system as one area the Mission can gain additional assistance from the UN, with the aim of bolstering T&T’s national data for the enhancement of business, government decision making and improving day to day living.  The Planning Minister also emphasised the government’s plans to support citizens, especially with the current global challenges and outlined poverty, climate change and infrastructural development as other areas of focus for the Mission.  His Excellency also raised health, especially Non-Communicable Diseases (NCDs) as another area of concern because of the deleterious effects public health issues pose to the economy as a result of the cost of health care, productivity in the work force and on national development as a whole.

The new Head of Mission agreed to take these matters up as key focal areas within the UN system as he begins his new post.

Senator the Honourable Dr. Amery Browne, Minister of Foreign and CARICOM Affairs presented Instrument of Appointment on behalf of Dr. Keith Rowley, Prime Minster of the Republic of Trinidad and Tobago, to Mr. Dennis Francis, new Head of Mission, on 19th May, 2021 at the headquarters of the Ministry of Foreign and CARICOM Affairs. His Excellency Dennis Francis will assume duties as the Permanent Representative of Trinidad and Tobago to the United Nations, New York.