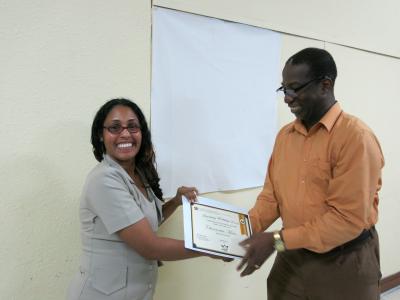 The National Family Services Division of the Ministry of Social Development and Family Services ended its recent parenting workshops initiative on a high note, with many participants suggesting that the programme become a staple in communities across Trinidad and Tobago.

It was at the workshop’s distribution of Certificates of Participation, that many parents chose to express their satisfaction about the themes and materials which were used.

Over the course of six weeks, thirty-nine adults participated in the sessions, which were chaired by Dr. Anthony Sylvester at the San Fernando City Corporation. Topics for discussion included the issues of bullying (including cybercrimes), sexuality and identity, as well as, responding to teenage pregnancy.

According to Mr. Ravi Seeraj, who is the father of an 8-year-old girl, he felt empowered to lay a stronger foundation for his family because the information would prove beneficial to his role as the head of his household. He also expressed that he felt a little better about broaching the topic of sexuality in the future with his daughter.

Ms. Chandroutee Motee, mother of two, felt that the workshop was a success because of the interaction between the Course Facilitator and attendees. She specifically mentioned the value in learning from the experiences of other parents, especially those with teenagers.

To be awarded a Certificate of Participation, attendees must complete at least four of the six classes.