Over 100 careers in agriculture waiting to be explored 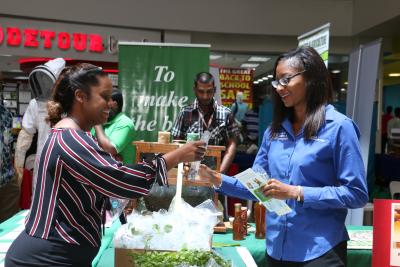 There exists over 100 jobs within the agricultural sector unbeknownst to the average citizen. Such was the revelation of Agricultural Assistant III in the Ministry of Agriculture, Land and Fisheries (MALF), Mr. Dexter Samm, as he assisted a team of MALF staff at the Public Service Outreach Campaign 2018 hosted by the Ministry of Public Administration at Trincity Mall, Trincity on Thursday 19th July, 2018.

Mr. Samm, who led a team of staff from MALF’s Regional Administration North (RAN) Division, identified with jobs such as an aquaculturist, marine biologist, postharvest technologist, plant pathologist and agronomist – just a few from a long list of career opportunities, clearly outlined in a ‘Careers in Agriculture’ brochure, which was visibly stationed at the Ministry’s booth, for dissemination to members of the public. Such enlightenment was further complimented by a free, seedling distribution as well as a series of five (5) to ten (10)-minute sensitization sessions, which sought to elaborate on the Ministry’s role and processes involved in the facilitation of: farmer / fisherman registration; State land applications and information on its range of agricultural incentive programmes.

Also commanding much traction from mall patrons was the Ministry’s live and interactive bee display in which visitors to the Ministry’s booth, got the opportunity to witness the activities of hundreds of bees from inside a honey comb, through a transparent, glass shield which was securely fastened to the display table, for added protection and safety. This, added to the elaborate fruit, cocoa, home gardening and fisheries displays, provided that much needed aesthetic to signal to all those present, that the agricultural sector remained vital to the socio economic development of Trinidad and Tobago.