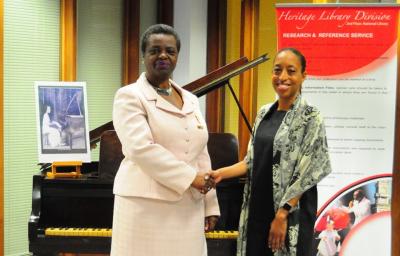 Olive Walke’s piano is a physical representation of the work done with her group La Petite Musicale in the 1940’s and 1950’s in rural areas such as Blanchisseuse, Mayaro, Maracas Valley, Carenage, Sangre Grande and Tobago to capture the folk music of our ancestors. This venture gave rise to the recognition and acceptance of the Spanish, French and African folk music regionally and internationally, which, undoubtedly would not have survived otherwise.  These songs which include, “Everytime ah pass”, “Mangoes”, “Genie e ca bucan” and other folk classics are now enshrined in Trinidad and Tobago’s musical heritage and are regularly performed in recitals and music festivals. NALIS is therefore pleased to accept this national treasure in keeping with its mandate to preserve, promote and exploit the heritage of Trinidad and Tobago for the benefit of our citizenry.