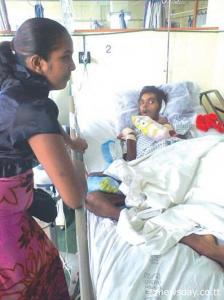 The home of Sea Lots accident victim, Ryan Rampersad was on Friday last assessed by technicians from the National Social Development Programme (NSDP).

The assessment, to ascertain the state of existing electrical wiring, plumbing and general infrastructure, comes on the heels of Rampersad's wife, Sally Ann and his mother's (Pearl James) cry for help.

According to James, the humble structure at Pioneer Drive, Sea Lots, Port-of-Spain is far from equipped to take care of Rampersad's immediate physical needs.

Friday'sassessment means NSDP technicians can now determine what renovations are necessary for the possibility of the return of the father of two, to his home.

Rampersad, one of the six victims plowed down by a vehicle in an accident on February 28th, 2013, was left with 98 percent of his body paralysed.

The 20-year-old is currently receiving long-term care on the neurological section of Port-of-Spain General Hospital (PoSGH) Ward 41 and was only recently allowed by doctors to be taken off respiratory machines, to breathe on his own.

They had all been returning from a shopping trip at the Port-of-Spain market, not too far away from their homes.