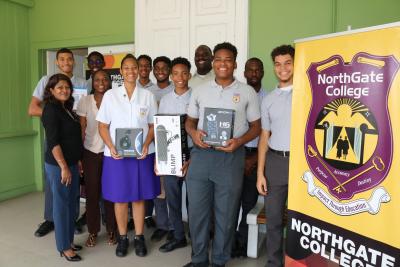 FilmTT’s General Manager, Nneka Luke, explained, “FilmTT remains committed to stimulating and developing the Trinidad and Tobago film industry at various levels. Working with young people through this programme, providing them with the tools, the knowledge and the opportunity to learn about alternative careers in the film industry, is a start. We were pleased to observe that, upon visiting each school, film clubs, festivals and film education, while still largely niche, are active. The teachers and principals must be credited as they are instrumental in nurturing student interest in the film and audio-visual world at the secondary school level.”

Since being a part of the SSSFF, several students have demonstrated a continuing passion for film and photography. Hillview College’s Film and Photography club went on to create other short films such as Sweat and Invisi-bill, which appeared in the 2016 and 2017 Trinidad and Tobago Film Festivals respectively. The club even has its own Film Festival which is open to other schools; the event takes place on their campus and has included judges from the UWI Film Programme.

ASJA Girls (Charlieville), despite it being their first time entering the festival, won awards for Best Cultural Film with their short film Mami Say, and Best Actress and Best Script/Storyline for the movie Chocolate Please; they expressed their increased appetite for film activities since the festival. “We created a film club in 2014 to take part in the festival, and we have been searching for more opportunities to participate in projects like it since,” says ASJA Girls’ teacher, Usha Pollucksingh. “Our film club hosts girls of all ages, and each have learned that there are viable career options in the film industry. Support is an important part of maintaining the club, however, I have noticed that other areas within schools has more support than the arts and we need to revise this, especially as it pertains to film.”

Northgate College, the school that topped the festival with their movie Timeless by winning the awards for Best Social Awareness Film, Best Actor, Best Editing (tied), Best Director, Best Cinematography and Best Overall Film, also expressed their interest in continuing their film projects and participating in audio-visual programmes. David Phillipe, teacher at Northgate College, said “From the festival, we were able to interact with professionals and receive training in various areas of filmmaking. We were grateful for the opportunity and would definitely be a part of any future FilmTT projects that promote youth development in film.”

Luke stated, “with film, animation and game design now being offered as a C.A.P.E. Creative Arts subject, we can see a growing need for programmes that target youth and development in film, exposing students to the art of filmmaking and allowing them to consider this field as a possible career. Teachers will continue to be an important force in driving the students’ passions and interest in this sector.”