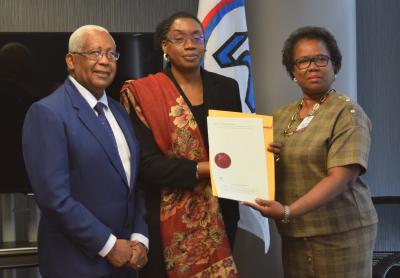 The National Institute of Higher Education, Research and Technology (NIHERST) has a new President with the appointment of Marleen Lord-Lewis. She received her Instrument of Appointment from the Honourable Anthony Garcia, Minister of Education,  during a brief ceremony  at the Education Towers on Monday 5th August, 2019.

After receiving her Instrument of Appointment, Ms. Lord-Lewis thanked the Honourable Anthony Garcia, Minister of Education for placing confidence in supporting her as President of NIHERST. She also pledged to lead the Board to encourage students to pursue careers in Information Communication Technology (ICT) and the new scientific frontier of Artificial Intelligence (AI).  “By more students becoming technologically literate and inventive in the many areas of IT, the nation could become globally competitive in the IT sector, thereby earning critical foreign exchange for the economy as scientific entrepreneurs,” she said.

In his brief remarks, the Honourable Anthony Garcia, Minister of Education challenged the NIHERST Board of Governors to continue striving to take NIHERST up to international scientific standards, such as in Artificial Intelligence and in other areas of Information Communication Technology development. “I’m also calling on the NIHERST Board of Governors to ensure that NIHERST leads the way in inspiring students in transforming the country into one of the global hubs in the Information Communications Technology industry,” he said.

Part of NIHERST’s work involves research and intelligence gathering to formulate a National Science Policyto guide funding of research and development and to promote innovation and commercialisation of technology in priority areas.