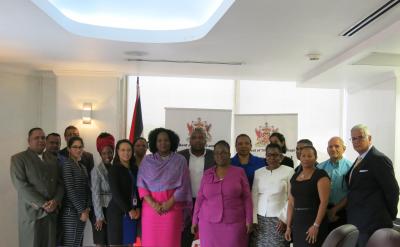 “Establishing and implementing a Continuum of Care for persons who are street dwellers in Trinidad and Tobago is a critical responsibility of this Committee, as we work towards eliminating street dwelling and by extension, the rehabilitation and reintegration of this at-risk population”,  Minister of Social Development and Family Services, The Honourable Cherrie Ann Crichlow-Cockburn told the 10-member committee, as they were presented with letters of appointment on August 2, 2018, during a brief ceremony at the Ministry’s Head Office in Port of Spain.

Members and Alternates of the newly appointed Coordinating and Monitoring Committee for Street Dwelling, were addressed by both the Minister and Permanent Secretary, Ministry of Social Development and Family Services, prior to receiving their letters of appointment.

Permanent Secretary and Chairman of the Committee, Natasha Barrow, in her welcome remarks, told those present that she was confident that although the mandate of the committee seems onerous, she was encouraged by the level of expertise and skills, competence level and drive of the persons selected to serve on the committee and pledged her commitment to ensuring that the Committee’s mandate was achieved.

In her address to the newly appointed committee, Minister Crichlow-Cockburn described the functions of the Inter-Disciplinary Coordinating and Monitoring Committee as being timely and significant and highlighted that four core areas of focus will be looked at, namely, treatment, rehabilitation, employment and housing. The Minister also applauded the previously established Street Dwellers Working Committee for their comprehensive Report and Action Plan and lauded the incoming Inter-Disciplinary Coordinating and Monitoring Committee for their commitment to serve at the humanitarian level with respect to its implementation. She indicated that she looks forward to interim update reports, based on the approved action plan.

Minister Crichlow-Cockburn also indicated that the Ministry engaged in several preparatory initiatives, which would assist the Committee at the onset.  Among these included: a street count to determine trends in the number of street dwellers between 2016 to present; steps to acquire the Old Besson Street Police Station for the establishment of an Assessment Centre and identification of locations for the establishment of transitional housing facilities. Minister

Crichlow-Cockburn also assured those in attendance that subventions continued to be provided to two (2) NGOs for the management and operations of Shelters. These are the Centre for Socially Displaced Persons, operated by St. Vincent De Paul in Port-of-Spain and Court Shamrock in San Fernando. Stakeholder engagement towards the review of the Social Displacement Act #59 of 2000 also commenced.

President of the Downtown Owners and merchants Association Gregory Aboud endorsed and congratulated the newly installed committee members.  He encouraged the members to see their role as a call to service and charity and told them to be inspired by what the committee could do for the population of street dwellers in Trinidad and Tobago

The following is a list of the committee members who will serve for the period of 18 months: