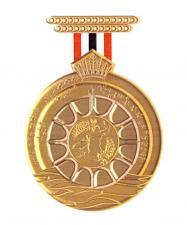 The National Awards of Trinidad and Tobago acknowledge the involvement of citizens and non-nationals who have had a significant and positive impact on the twin island Republic. The awards which were instituted in 1969 have been presented yearly in four categories, they are:

ORDER OF THE REPUBLIC OF TRINIDAD AND TOBAGO

Order of the Republic Trinidad and Tobago

The award is 18 carat yellow gold and hangs from a short-length, striped gros-grain ribbon in the national colours, red, white and black. On the front of the award there are three circles each encompassing a feature of the National Symbols of Trinidad and Tobago, with a crest at the top. Within the crest is a feathered head dress of an Amerindian chief, which represents the aboriginal culture of the twin island.

The centre of the design features a disc, upon which the familiar image of one of our national birds, the Scarlet Ibis is standing on the south- western peninsula of Trinidad and the Mot Mot perched on the image of Tobago both imposed in bas-relief. At the top of the circle is the Chaconia Flower, the National flower of Trinidad and Tobago. In the middle circle there is a display of twelve outer notes of a tenor pan. On the notes are a pair of pan sticks. The steel pan is placed on the award as it is the National instrument of the twin island republic. Within the third and outer circle are images which represent the sea and sky. Waves at the bottom represent the sea whilst the sky is represented via clusters of star shapes and fine granulation.
On the back of the award, the words “Order of the Republic” are engraved.

The name of the Society to replace the Order of the Trinity is The Distinguished Society of Trinidad and Tobago and the initial O.R.T.T. is to be used by future holders of this award, after their names.

The Order of the Republic of Trinidad and Tobago is only awarded in gold and is limited to five recipients each year, though the number may be less.

In order to be nominated for an award, a “Nomination for a National Award” form must be filled out. Forms and more information about nomination submission can be obtained at The Office of The Prime Minister, Tobago House of Assembly and City and Town Halls.

THE MEDAL FOR THE DEVELOPMENT OF WOMEN

The award categories and the corresponding criteria for those awards are as follows:

CATEGORY 1:
Nominations for Award in respect of a person:
Candidates must demonstrate innovation in the promotion of gender equity for no less than ten (10) years through the promotion of:
• Gender equality in the work place.
• The elimination of all forms of discrimination against women by the promotion of gender equity.
• Legislative and cultural reform to ensure gender equity.
• Institutional mechanisms for the advancements of women.
• Economic empowerment by: Overcoming marginalization, oppressive social norms access and rights to resources; Offering women choices and opportunities; and Encouraging women to fulfill their potential
• Education- based programs, initiatives or personal action in the empowerment of women; and
• Entrepreneurial activities

CATEGORY 2:
Nomination for reward in respect of Organizations
Corporations/ Organizations must demonstrate innovation in the promotion of gender equity for no less than ten (10) years through:
• The empowerment of women through initiatives, policies (procurement, hiring, training, etc.) or corporate social responsibility.
• Outstanding contributions to women’s organizations that support soc-economic empowerment and/or through achievement in the corporate world.

The medal consists of three parts: a medallion to which is attached a bar and winged shaped which partially surrounds the medallion and is hinged to it.

1. Women’s symbol- ( This symbol for the planet Venus is used in Biology for the female sex
and is a stylized representation of Venus’ hand mirror. Generally it is a circle with a small equilateral cross underneath.) In this drawing it occupies the centre of the medal and its cross quadrisect the map of Trinidad and Tobago.

2. A Globe- representing the world is contained within the circle of the symbol.

3. A winged Form- articulated and suspended from the central disc is a stylized winged shaped element whose radial sections are defined in bas relief.

The recipients of the first Trinity Cross Gold were:
• Dr. Rudranath Capildeo for his contribution in the sphere of Science.
• Ellis Clarke (Sir) - C.M.G., Q.C. who drafted the Constitution of Independent Trinidad and Tobago
• Solomon Hochoy (His Excellency Sir) - G.C.M.G., G.C.V.O., O.B.E. The then Governor General and Ex-Officio of Trinidad and Tobago
• Finbar Ryan (His Excellency Count) - O.P. in the sphere of religion as he was the then Archbishop of Port of Spain.
• Hugh Wooding (The Right Honourable Sir) - P.C., C.B.E., Q.C. For his contribution to Justice as he was the then Chief Justice

CHACONIA MEDAL
The Medal was aptly named after the Chaconia flower, which is the National Flower of Trinidad and Tobago and coincidentally blooms annually around August 31, just in time for Independence Day. It was first awarded in 1969 on the introduction of National Awards in Trinidad and Tobago. The identifying colour on the border of  the ribbon for this medal is light green.

The Medal, which is awarded in gold, silver and bronze is awarded to persons who have served the country in the field of social work. It is awarded to community workers in respective organizations who have promoted community spirit and national welfare through their long and meritorious service. The Chaconia Medal is awarded to a maximum of ten persons.

HUMMING BIRD MEDAL
Trinidad's indigenous name was Cairi or Kairi but often written Iere. Iere, which actually is an Arawakan terms  that means "the island", was thought by many to mean, “The Land of the Humming Bird”. The Humming Bird, one of the National birds of the Island, is also represented through this medal. The identifying colour on the borders of ribbon for this medal is Royal Blue.

The Humming Bird Medal is awarded to persons in the private or public sector for loyal and devoted service to their community and country. Additionally, the medal, which is awarded in gold, silver and bronze to a maximum of fifteen persons, may also be presented to persons for their gallantry or any other heroic action.

PUBLIC SERVICE MEDAL OF MERIT
The Public Service Medal of Merit is awarded to the members of the Civil and Protective Services. This Medal also includes recipients from the Defence and Cadet Forces, members of Statutory Boards and Committees of other quasi Public Services.

The identifying colours of the borders of ribbon are: