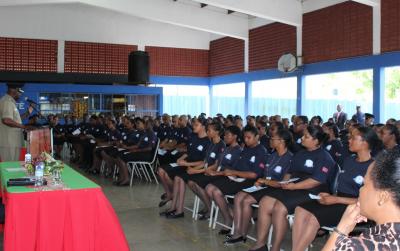 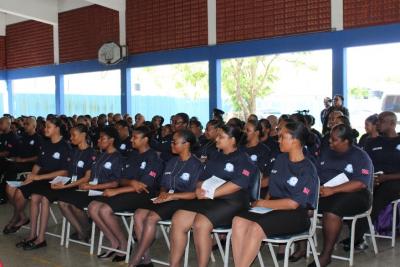 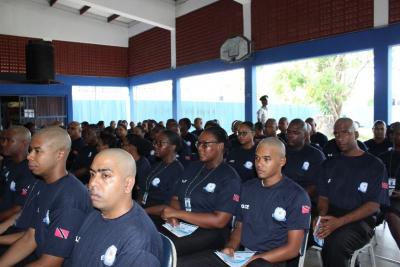 December 5, 2019. Kent House, Maraval – The Ministry of Rural Development and Local Government, through the Trinidad and Tobago Municipal Police Service, hosted an induction ceremony for the Municipal Police Training (General Policing Level II) for Batch 2 of 2019 on Tuesday.

One hundred and twenty four (124) trainees entered into an eighteen (18) week-long, non-residential training programme which features, among other modules, the following:

The trainees will also be educated in the Municipal Corporations Act (1990). At the end of the training programme, successful officers will begin a two (2) year probationary period.

Additionally, Permanent Secretary in the Ministry of Rural Development and Local Government, Ms. Desdra Bascombe, welcomed the trainees and highlighted, “Policing is not just a job, policing is serious business.”  Ms. Bascombe reminded trainees that not only are they accountable to their supervisors, they are also accountable to the citizens of Trinidad and Tobago.

“The growth and development of the Municipal Police Service is a great source of pride for me as this has been one of my critical mandates since taking office. I fully support the Municipal Police Service.  This job is a very important one, so officers must do it with love and pride.  Officers must respect each other and respect their families and be courteous to those in the communities in which they serve. This is one of the key elements of good local governance,” These were the remarks from the Minister of Rural Development and Local Government, Senator the Honourable Haji Kazim Hosein, for this new batch of trainees.

The gathering was also addressed by representatives of the Office of Law Enforcement Policy – Ministry of National Security, the Statutory Authorities Service Commission and the Trinidad and Tobago Police Academy who encouraged the trainees to make the best of the opportunities before them as they seek to enter into the noble profession of policing.

The Ministry of Rural Development and Local Government continues to make strides in achieving its mandate of increasing the number of Municipal Police Officers in all Corporations by one hundred (100) and by two hundred (200) in the capital city of Port of Spain.