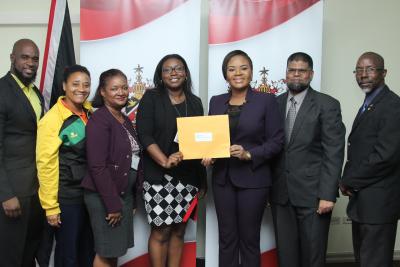 Port of Spain, Friday June 21, 2019: Last month, Minister of Sport and Youth Affairs, the Honourable Shamfa Cudjoe, along with officials of the Ministry of Sport and Youth Affairs, today met with President of the Trinidad and Tobago Cheer Federation (TTCF), Koya Barrimond and Attorney-at-Law Sasha Darbeau, to grant the organisation official status of National Governing Body (NGB).

Speaking with Ms. Barrimond and Ms. Darbeau at the Ministry’s Head Office at #2 Elizabeth Street, St. Clair, and Minister Cudjoe expressed keen interest in Cheer and underlined the lack of understanding of Cheer as a serious sport. The Minister commended TTCF for sending a contingent of 75 athletes to participate at the World High School Cheerleading Championship and World All-Star Cheerleading Championship earlier this year.

Ms. Barrimond expressed her gratitude to Minister Cudjoe for granting NGB status to the TTCF, especially after waiting 10 years since the TTCF made its official request to the Ministry for NGB status. Ms. Barrimond stated that this recognition as the National Governing Body for the sport is a significant milestone in the organisation’s history.

TTCF was founded in 2009 and is a registered member of the International Cheer Union and the ICU Pan American Federation. In 2017, cheer was granted provisional status by the International Olympic Committee to be considered an Olympic sport.

The Ministry of Sport and Youth Affairs continues to work towards the development of sport, and the advancement of our citizens through sports.