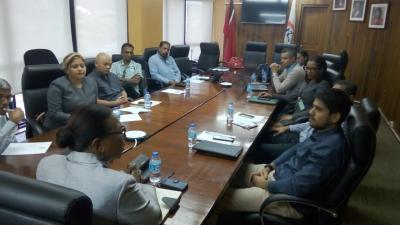 Permanent Secretary at the Ministry of Social Development and Family Services, Jacinta Bailey-Sobers, today met with the President, Mr. Rajiv Diptee and some of the members of the Supermarkets Association of Trinidad and Tobago at their monthly meeting, which took place at the National Flour Mills Limited Head Office on Wrightson Road, Port of Spain. The main purpose of the meeting was to ensure that the mechanisms which were instituted for the smooth transition of the New Debit Card System were working well and also to provide information to merchants to ensure that they were comfortable with the new system.

Prior to and following the commencement of distribution of the New Debit Cards for Food Support clients on December 5, 2019, the Ministry has continued to have close discussions with the key stakeholders for the implementation of the transition, primarily, First Citizens Bank Limited, the main distribution agent – TT Post, and the merchants and grocers, to ensure an efficient and effective transition.

The members of the Association present at the meeting gave the assurance that all was well thus far with the transition and representatives from First Citizens Bank were on hand to clarify any issue and to commit to providing continuing support to new and existing merchants with regard to the application process. The Bank representatives confirmed that more than 286 locations have been approved to date.

Association President, Mr. Diptee, expressed his gratitude to the Bank officials for the quick turnaround time it took to settle  issues, which occurred during the initial roll out and thanked the Permanent Secretary for taking the time off to meet with members to reaffirm the Ministry’s commitment to a smooth transition to the new system.

The Permanent Secretary closed by expressing gratitude to the stakeholders for their contribution and support during the transition as the Ministry seeks to  improve the quality of service provided to the vulnerable citizens of Trinidad and Tobago.

The Ministry is encouraging all persons with old cards to use the balances on their cards by January 31st, 2020.