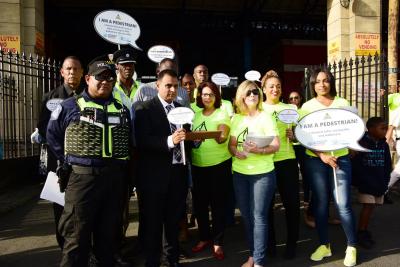 Minister of Works and Transport Rohan Sinanan (second from left, front row) with police officers and members of Arrive Alive at the launch of Global Road Safety Week.

The Ministry of Works and Transport, in partnership with Arrive Alive and the Trinidad and Tobago Police Service (TTPS) launched the local arm of Global Road Safety Week which is being observed May 6th – 12th 2019. The week’s activities are championed by thousands of road safety advocates around the world who seek to highlight the need for effective leadership on both political and individual levels. Themed “#Speak Up for road safety”, this year’s agenda will focus on Pedestrian Road Safety in Trinidad and Tobago where the public will be engaged and educated on pedestrian best practices.

Minister of Works and Transport, Senator Rohan Sinanan, in his feature address at the launch of the Fifth UN Global Road Safety Week, at the City Gate Bus Terminal Pedestrian Crossing on Monday May 6, expressed MOWT’S vision for the attainment and recording of zero fatalities on the roads of Trinidad and Tobago. He also encouraged those in attendance whether they travelled as pedestrians, cyclists or motorcyclists, to use their power to speak up. He encouraged pedestrians to respect the laws of the land, and to make use of the pedestrian crossings that the Government continues to make available to citizens.

Although the statistical data put forward by the Trinidad and Tobago Police Service indicated that the Road Fatality Rate recorded in 2018 was the lowest since 1958, the current road fatality rate for 2019 has surpassed last year’s figure already by twenty five per cent (25%), something Minister Sinanan notes as ‘unacceptable’.

To demonstrate its leadership in road safety, Sinanan assured that the Ministry would continue the drive for key road safety initiatives with the imminent introduction of the latest road safety measures by virtue of the amendment to the Motor Vehicles and Road Traffic Act, Ch. 48:50 (Act No. 9) of 2017) which include, the introduction of Red Light Camera Enforcement, Spot Speed Camera Enforcement, a Demerit Points system and the reform of the Fixed Penalty System. Minister advised once the necessary systems are implemented it will improve and increase discipline on the nation’s roads.

Across the globe, several events are planned in observance of road safety week, such as assessing journeys and generating concrete demands from policy-makers in more than 50 countries - from Brazil to Mongolia and Nigeria to Pakistan, as well as the upgrading of pedestrian crossings in Trinidad and Tobago.

Heritage Petroleum responds to incident in its Guapo field
Minister of Health visits airport to observe Infectious Disease Protocols
Minister Young urges police graduates to protect the independence of the Police Service and to serve with pride and integrity
The Heritage site, the Red House returns to its glory
“Master of Carnival” returns to NAPA