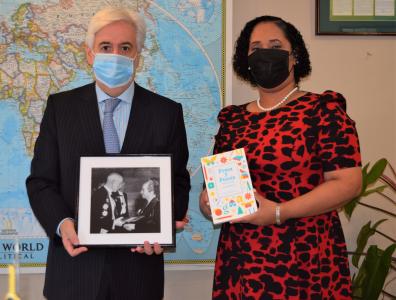 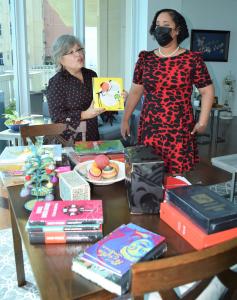 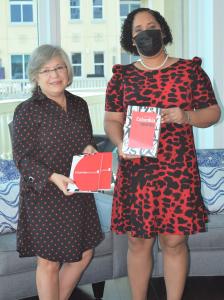 November 27, 2020, Port of Spain: The Ministry of Education continues to strengthen its efforts to promote and facilitate the teaching of Spanish as a second language.

On Friday 27th November, 2020, the Honourable Lisa Morris-Julian, Minister in the Ministry of Education received, on behalf of the Ministry of Education, several copies of books in Spanish written by Noble Prize winner in Literature, famous Chilean author and poet-diplomat Gabriela Mistral. The presentation of the books was made by the Chilean Ambassador, His Excellency Juan Aníbal Barría, at the Embassy of Chile.

In a separate visit, Minister Morris-Julian also received, another donation of books, this time from the Embassy of Colombia. The Colombian Ambassador, her Excellency Martha Cecilia Pinilla Perdomo presented several copies of books from world-renowned Colombian authors to the Ministry of Education. Among these authors was Gabriela Garcia Marquez, who is considered to be one of the most significant writers of the 20th Century, particularly in the Spanish Language.

At the separate meetings, future collaborations among the Ministry of Education and the Governments of Chile and Colombia to continue to work closely to strengthen the education system in the promotion of the Spanish Language and other spheres of cultural cooperation were also discussed

Since 2016, the Embassies of Chile and Colombia, together with eleven (11) other Consulates, co-host the Spanish Conversation Club. This Conversation Club continues to be conducted on a weekly basis at the Head Office of the National Library and Information Systems (NALIS) located on Abercromby Street, Port of Spain. Currently, the sessions are conducted within an online virtual environment on Tuesdays from 5 pm to 6 pm. The Club is open to the general public and seeks to provide nationals with an opportunity to hone their conversational Spanish skills.