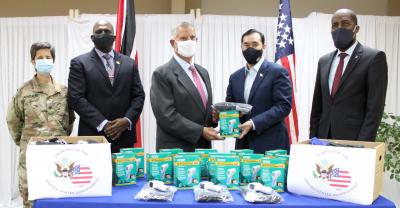 The brief handover ceremony was held at the Ministry of National Security’s Head Office on Abercromby Street, Port of Spain.

Minister Young expressed his gratitude to His Excellency Mondello for the provision of the equipment, stating that the items will assist with Government’s efforts to mitigate the spread of COVID-19 in Trinidad and Tobago.

Both the Minister and the Ambassador noted that the handover of items is demonstrative of the existing longstanding bilateral security cooperation and friendship between Trinidad and Tobago and the United States of America.

The Office of Disaster Preparedness and Management (ODPM) will oversee distribution of these protective items to the various Divisions and Agencies of the Ministry of National Security.