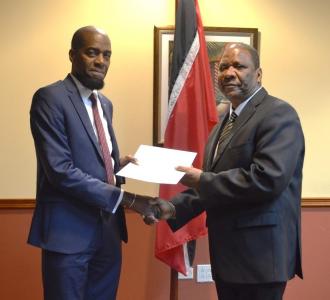 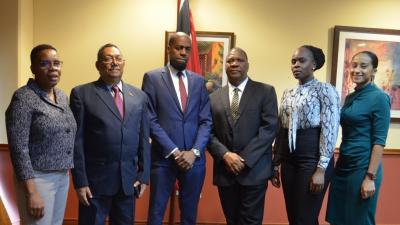 Port of Spain: The Ministry of National Security on January 06, 2020, issued instruments of appointment to persons who will serve as members of the new Criminal Injuries Compensation Board (CICB).

Permanent Secretary of the Ministry of National Security Mr. Vel Lewis presented the instruments of appointment to members of the Board at the Ministry’s Office located at Tower C, International Waterfront Complex, Wrightson Road, Port of Spain.

Attorney-at-law Mr. Alvin Pascall has been appointed Chairman of the Board. Mr. Pascall, who has served on the CICB since its inception, brings to the Board significant experience having been employed in the legal practice for the last twenty-seven (27) years, in both public and private practice. Mr. Pascall currently holds the position of Head of the Legal Department at the Ministry of Housing and Urban Development. He has served as Legal Advisor for several Ministries of Government and is a former Senior State Council for the Tobago House of Assembly (THA).

The CICB was established in 2006 to provide compensation to persons or dependents of persons who have suffered injury as a direct result of violent crime as defined in the Criminal Injuries Compensation Act 21 of 1999. The Board has the mandate to evaluate and determine applications for compensation of victims or their dependents as provided for in the Act.

Permanent Secretary Lewis thanked the CICB Chairman and Members for their willingness to serve Trinidad and Tobago. He congratulated them on their appointment, noting their important mandate and wished them a successful term in office.

Members of the Board held their first meeting yesterday following the presentation of their instruments of appointment.