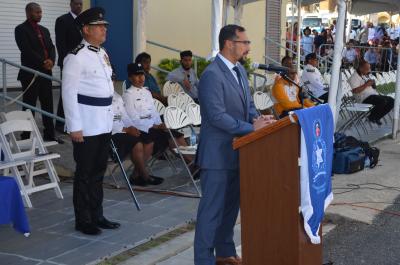 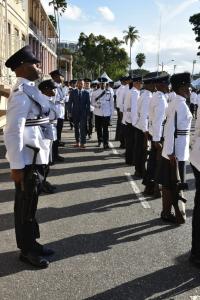 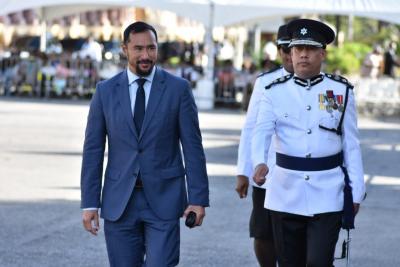 Port of Spain: Minister of National Security, the Honourable Stuart R. Young M.P. has urged new members of the Trinidad and Tobago Police Service (TTPS) to jealously protect the independence of the Police Service, to always remember their organization’s watchwords “to protect and serve with pride” and to conduct their duties with integrity, courtesy and fearlessness.

Minister Young gave the advice as he delivered the feature address at the TTPS Passing Out Parade for Batch 2 of 2019, held at the Police Training Academy, St James yesterday (Wednesday January 22, 2020).

Minister Young told the new graduates that part of their responsibility was not to only carry out their duties with professionalism, but to always protect the organizational independence of the TTPS.

Minister Young said: “as part of your responsibilities as fully fledged officers of the Trinidad and Tobago Police Service, is to never let the independence or integrity of the Police Service come into question or criticism.”

He added: “you must guard against those elements in our society that will want to wear away and attack without justification, sometimes relentlessly, the independence of some of our country’s institutions that are charged with the constitutional responsibility to protect and serve the good citizens of Trinidad and Tobago.” Page 2 of 3 The Minister said that he stands in solidarity with the men and women of the TTPS who work tirelessly, every day to keep the citizens of Trinidad and Tobago safe and secure. He encouraged the new police officers to recognize the importance of their role in national security and he assured the new graduates and all members of the Police Service that they had the full support of the Government.

He said: “Government will continue to supply the Police Service with the requisite technology, equipment, infrastructure and other resources so that the organization can carry out its responsibility to the people effectively and efficiently.”

Minister Young congratulated the 100 recruits on the successful completion of their induction training and welcomed them into the service and by extension the National Security family. He then took the opportunity to thank all the men and women of the TTPS for their dedication to duty and selfless service to the people.

WPC Harding received the award for scoring the highest marks in Defensive Tactics and WPC Pierre was awarded the “Commissioner of Police” Trophy and the “Best Stick” for Most Outstanding Recruit.

Also present at the Passing Out ceremony were Parliamentary Secretary in the Ministry of National Security, the Honourable Glenda Jennings-Smith, Commissioner of Police, Mr. Gary Griffith and other members of the Police Service.