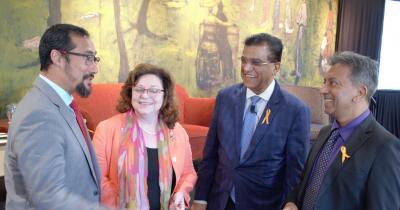 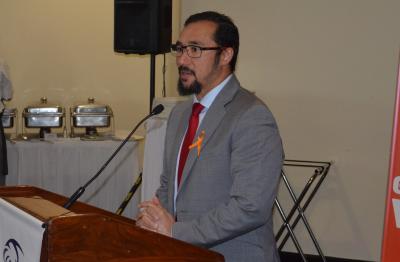 Port of Spain: Minister of National Security, the Honourable Stuart R. Young, M.P. assures that Government remains committed to tackling the issue of gender-based violence against women in Trinidad and Tobago.

Minister Young made this statement at a Breakfast Meeting hosted yesterday November 25, 2019 by the Inter-Club of Trinidad and Tobago at the Hilton Trinidad and Conference Centre, Lady Young Road, Port of Spain.

Hosted under the theme “A Conversation About Human Trafficking and Sexual Exploitation”, the meeting was held in observance of the International Day for the Elimination of Violence against Women and kicked off the start of 16 Days of Activism against Gender-Based Violence, an international campaign which concludes on December 10, Human Rights Day. Spearheaded by the Inter-Club of Trinidad and Tobago, the meeting engaged local and international stakeholders in the public, private and non-governmental sectors.

Minister Young commended the nineteen (19) women’s organisations that make up the InterClub of Trinidad and Tobago for their work in championing gender-based issues and the rights of women. He described the meeting as a positive collective response by stakeholders to raise awareness about the prevalence of human trafficking and sexual exploitation in Trinidad and Tobago.

Minister Young assured that the Ministry of National Security continues to work assiduously to defend and protect all citizens from the criminal elements. He stated, “The various arms of the Ministry of National Security remain dedicated to fighting organized crime, as well as violence against women, sexual exploitation against women and the crime of human trafficking”.

Minister Young encouraged members of non-governmental organisations to continue to work with the Government of Trinidad and Tobago to eliminate violence against women in all its forms. He urged members of the audience to stand up against any untoward behaviour that they may witness in society. The Minister said, “Do not embrace the bullies and cowards in 2 society. Let them know that what they are doing is unacceptable and that we can get them the help they may need. Let them know that the answer is not to abuse our women and children.”