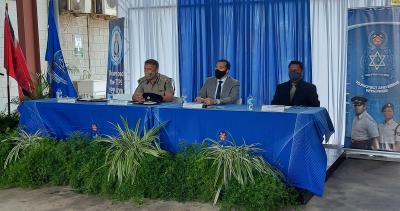 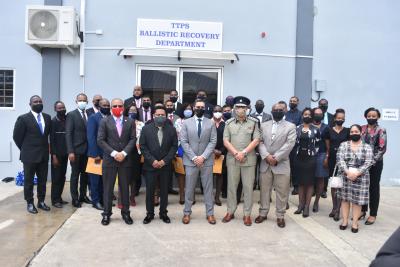 Port of Spain: The Ministry of National Security has enhanced this country’s technological capacity to detect and solve crime and deliver justice at a faster rate, with the official opening of the Trinidad and Tobago Police Service (TTPS) Ballistic Recovery Department. Also on Friday January 29, 2021 twenty-six (26) Officers graduated from the Firearm and Toolmark Examination Programme conducted at the Special Evidence Recovery Unit, Camp Cumuto, Wallerfield

The new state of the art department will provide a more secure and scientific environment for the testing of firearms, and will speed up the process of forensic testing, thereby reducing the workload on the Trinidad and Tobago Forensic Sciences Centre (TTFSC).

Delivering remarks at the Graduation Ceremony and the Commissioning of the Ballistic Recovery Department, Minister of National Security, the Honourable Stuart R. Young M.P. acknowledged those officers who underwent training and recognized the strides forward that the Police Service has taken to become more self-sufficient in the area of Forensic Analysts and Ballistic Testing.

Minister Young stated, “Today is about marrying the use of technology and science with practical work to bring more convictions in crimes involving the use of illegal firearms.”

The Minister continued by saying, “Ballistic evidence cannot be tampered with.... it reveals the facts which cannot be changed. So, this is a warning to all the criminals who are walking around with illegal firearms, that today the TTPS has made a significant step in not only the fight against crime, but also with assisting in clearing the backlog of ballistic testing.”

The programme which commenced in June 2020 included modules on Bullet Comparison and Identification, Small Arms and Ammunition, Evidence Handling Procedures and Gunshot Residue and Distance Determination. The participants also undertook an online training course, “Introduction to Forensic Ballistics’ hosted by the United Nations Regional Center for Peace, Disarmament and Development in Latin America and the Caribbean (UNLIREC).

This training was a precursor to the opening of the Ballistic Recovery Department which ensured that y the TTPS now has a fully operational facility, manned by skilled personnel with the ability to perform forensic analysis on illegal guns.

Minister Young urged the graduates to use their new knowledge and skills to increase the speed and efficiency of crime detection and investigation in the country.

He told them, “The people of Trinidad and Tobago invested resources in you, so the job that you are now called upon to perform is going to be critical in the fight against the scourge of illegal firearms and illegal gangs. You will also now have a key role in providing the Director of Public Prosecutions and the court system with the necessary evidence against criminals”

The Minister concluded by thanking the graduates for their commitment and diligence to the intense training programme and said that, “I am looking forward to the results of your hard work and also to building that intelligence database where we could now link the scenes of crimes with the illegal firearms, as we continue the fight against criminals using science in the successful detection of serious crime.”