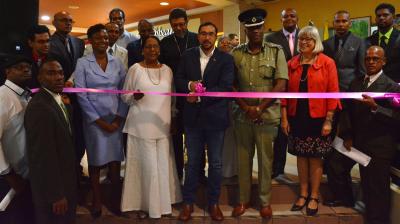 Minister of National Security the Honourable Stuart R. Young M.P. is commending the Trinidad and Tobago Prison Service for its steadfast efforts at providing rehabilitative initiatives to the inmate population, with the aim of preventing repeat offending.

The Minister was speaking on Tuesday (August 6, 2019) at the Opening of the Inmates’ Art Exhibition at the Atrium, Long Circular Mall, St. James.

Minister Young described the Exhibition as a noteworthy example of the Ministry of National Security’s focus on rehabilitation and reintegration.

The Minister congratulated the ten (10) inmate artists who participated in the Exhibition on the splendid pieces of art they produced and noted that their work served as a symbol of hope for inmates as well as society. He also urged them to serve as mentors to other inmates so that they too can benefit from positive transformation.

Minister Young affirmed that Government is pursuing strategies which ensure that today’s offenders become tomorrow’s contributors to national development. He stated, “We as stakeholders understand that offenders require help to take responsibility for their actions and move forward with their lives. It is our duty to present them with meaningful opportunity to turn their lives around as well as reduce the rate of reoffending.”

The Minister also shared a number of infrastructural upgrades that have been undertaken at prison facilities. These include improving the plumbing and electrical system at Remand Yard, Golden Grove to include toilet facilities and better lighting and ventilation; the upgrade of the Closed Circuit Television System (CCTV) at the Maximum Security Prison; and the outfitting of an existing building on the compound of the Golden Grove Prison in Arouca, to be utilised as a rehabilitation centre for female minors who have been referred for rehabilitation by the court system.

The Minister said the Ministry of National Security remains committed to working with the Prison Service towards making a safer and more secure environment for prison officers and inmates and will continue to provide the necessary support to enhance the Service, emphasizing the employment of additional psychologists in the prison system.

Minister Young acknowledged the efforts of the Trinidad and Tobago Prison Service Programmes and Industry Department and the Raja Yoga Prison Ministry of the Council of Prisons Chaplains and Ministers (COPCAM) who have been collaborating for over ten (10) years to facilitate the Prison Art Initiative and the Exhibition.